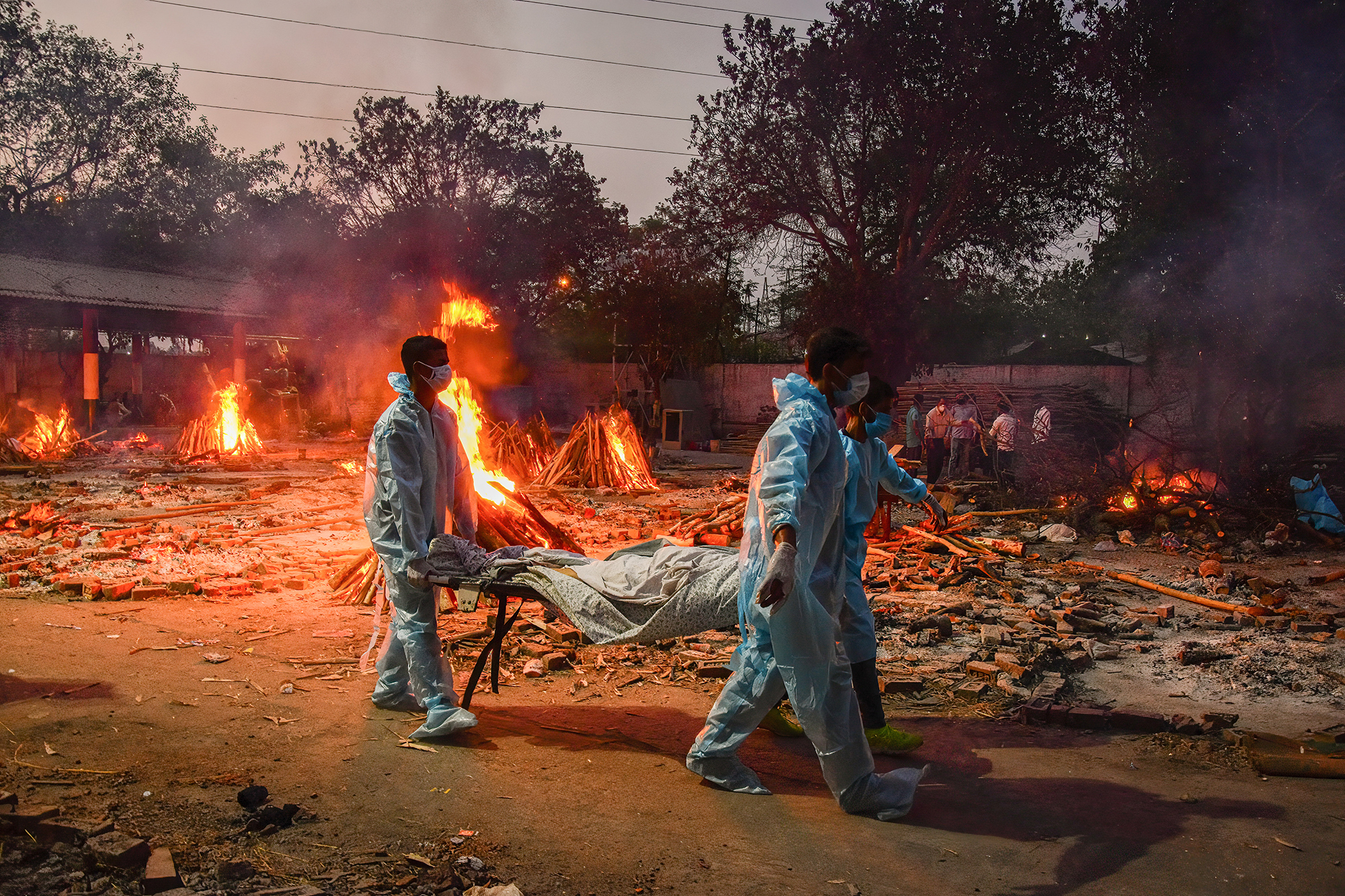 More than a year into the COVID-19 pandemic, India is being crushed by a new surge of infections that is shattering global records.

The unprecedented explosion in cases came even after the country had fared relatively well against the pandemic until recently.

Experts point to a “perfect storm” of factors to explain why the country is being hit so hard all of a sudden.

The outbreak comes on the heels of the government allowing massive crowds to gather for Hindu religious festivals and political rallies before state elections — compounded by more relaxed attitudes about safety precautions and the emergence of new, more contagious strains of the virus.

The country broke its own record for daily coronavirus cases and deaths on Thursday with 412,262 new infections and 3,980 fatalities over the last 24 hours. Both figures, however, are believed to be an undercount.

April 30, 2021: Bodies of those who lost their life due to COVID-19 wait to be cremated during the mass cremation at Dwarka crematoriumZUMAPRESS.com

The latest crisis stands in stark contrast to the first wave of the pandemic, when it issued one of the harshest lockdowns worldwide on its 1.3 billion population.

Prime Minister Narendra Modi’s government banned all domestic and international travel in late March 2020 and shut down factories, schools, offices and all stores other than those providing essential services.

Case numbers peaked around September at nearly 100,000 infections, but then the infection rate slowed significantly, declaring all-time case lows in January and February.

A COVID-19 patient breathes with the help of oxygen provided by a Gurdwara, a place of worship for Sikhs, under a tent installed along the roadside in Ghaziabad on May 6, 2021.AFP via Getty Images

Modi said the country had beaten the virus in late January, insisting its efforts had saved “humanity from a big disaster by containing the coronavirus effectively,” Foreign Policy reported.

“The government just did not see the second wave coming and started celebrating too early,” Dr. Shahid Jameel, a top virologist, told the BBC.

Following the declaration of victory, people dropped their guard when it came to health measures, such as wearing masks and social distancing, experts said.

This included a number of Modi’s ministers who ignored the government’s mask recommendations while addressing large crowds at rallies during his election campaign.

COVID has spread throughout India with 412,262 new infections and 3,980 fatalities over the past 24 hours.ZUMAPRESS.com

The government also allowed people to gather for Kumbh Mela in April, a Hindu festival that attracts millions to go ahead on the Ganges River in Haridwa.

“There was a complete disconnect between what they practiced and what they preached,” Dr. Chandrakant Lahariya, a health systems expert in New Delhi, told the BBC.

Spurred by the emergence of contagious new variants, the second wave descended rapidly across the country, nearly doubling its official case count to 20 million in three months.

The surging cases have been made worse by deficiencies in the healthcare system, which does not have enough tests, drugs or hospital beds.

Shortages are also occurring with oxygen supplies, forcing families to scramble to find tanks themselves for the sick loved ones.

“When the first wave was tapering, that’s when they should have prepared for a second wave and assumed the worst. The [government] should have taken an inventory of oxygen and [the drug] remdesivir and then ramped up manufacturing capacity,” Mahesh Zagade, who was former health secretary of Maharashtra state, told the BBC.

Vaccinations are also lagging in the country, which doesn’t have enough doses and has only been administering shots to about 2.1 million people daily, or around 0.15 percent of its population.

“It will take months before we have enough vaccines to speed up the program. In the meantime, millions will continue to be at risk of getting Covid,” Lahariya told the BBC.