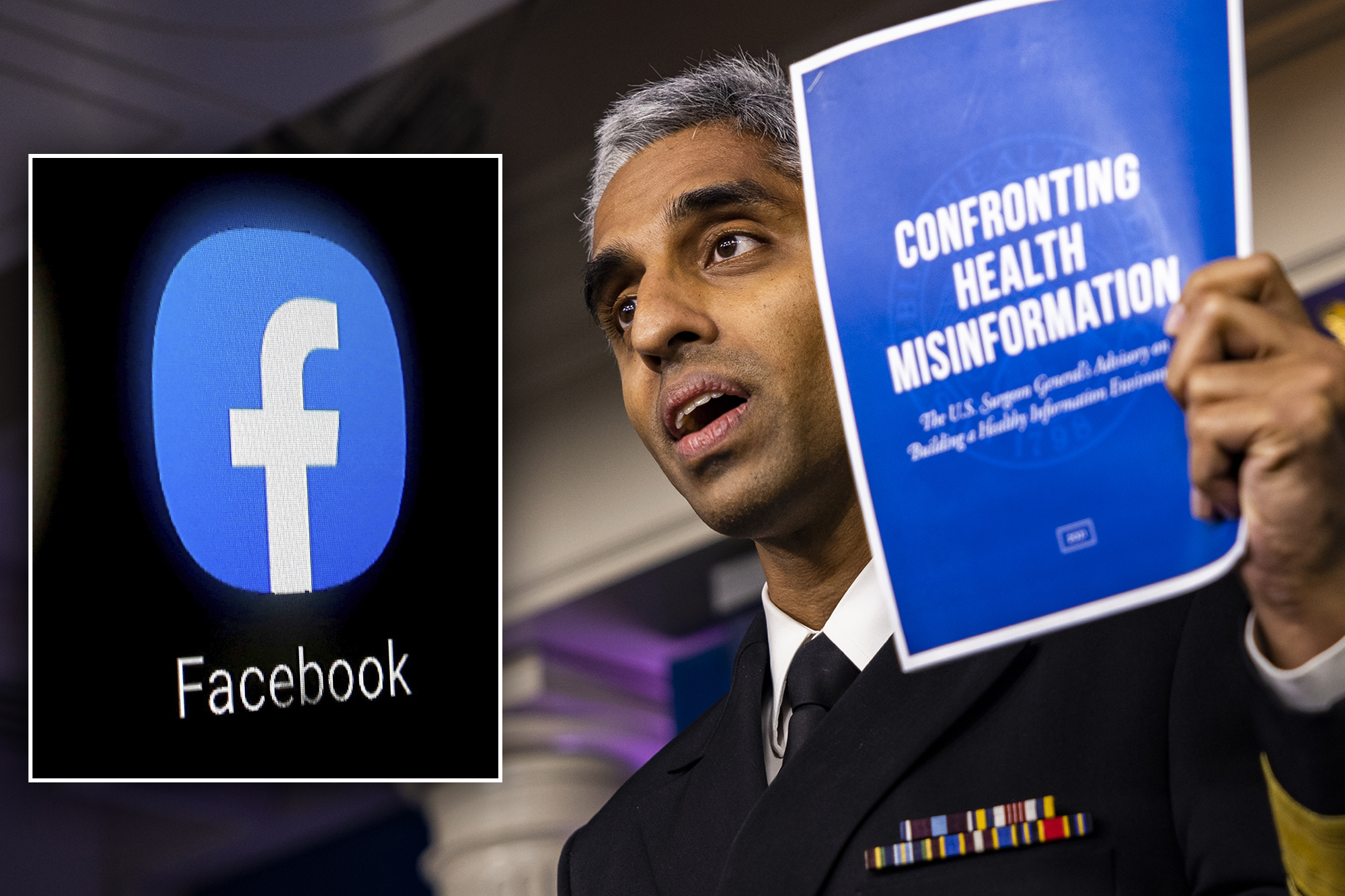 The demand for censorship — and Psaki’s admission of government involvement — follows a series of flip-flops from health officials who contradicted themselves throughout the pandemic on issues such as mask efficacy, as well as censorship of claims that later gained credibility, such as the theory that COVID-19 leaked from a Chinese lab.

“We are in regular touch with the social media platforms and those engagements typically happen through members of our senior staff and also members of our COVID-19 team — given as Dr. Murthy conveyed, this is a big issue, of misinformation, specifically on the pandemic,” Psaki said at her daily press briefing.

Surgeon General Vice Admiral Vivek Murthy has spoken out against problematic social posts in regard to COVID-19.Samuel Corum / Pool via CNP / Sp

She added: “We’ve increased disinformation research and tracking within the Surgeon General’s office. We are flagging problematic posts for Facebook that spread disinformation.”

Psaki and Murthy, who also spoke at the press briefing, specifically said they are concerned about “misinformation” about COVID-19 vaccines. About 68 percent of US adults have had at least one vaccine shot, according to CDC data, dramatically lowering infection rates in most parts of the country.

“Misinformation takes away our freedom to make informed decisions about our health and the health of our loved ones during the COVID 19 pandemic. Health misinformation has led people to resist wearing masks in high risk settings. It’s led them to turn down proven treatments and to choose not to get vaccinated. This has led to avoidable illnesses and deaths,” Murthy said.

Psaki and Murthy would not answer a shouted question about the fact that Dr. Anthony Fauci, Biden’s chief medical adviser and the top government infectious diseases expert, has himself vacillated on COVID-19 information.

Fauci did not promote mask-wearing in February, March and early April 2020 as the respiratory virus spread in the US, despite the historical use of masks to counter airborne viruses and their successful early adoption in East Asia. But Fauci later pushed even wearing two masks at a time.

Psaki added the government has been in close contact with social media companies about “misinformation.”Dado Ruvic/File Photo/Reuters

Other US health officials initially discouraged wearing masks. Surgeon General Jerome Adams asserted in a now deleted tweet that masks were “NOT effective” at protecting people from COVID-19 before later saying that they were effective.

Facebook this year stopped censoring posts that claimed COVID-19 may have emerged from the Wuhan Institute of Virology in China due to “evolving” information that bolstered the theory.

President Biden in May ordered a 90-day spy agency review of the lab leak theory. At least one spy agency was leaning toward that explanation, according to a statement released by the US intelligence community.

Social media networks have censored other posts before backtracking — notably including Facebook and Twitter censoring The Post’s reporting in October on documents from a laptop formerly belonging to Hunter Biden that appeared to link his father to business pursuits in China and Ukraine.

Former President Donald Trump filed lawsuits last week against Facebook, Twitter and YouTube, arguing that they are illegally squelching free speech rights on behalf of the government. Trump was banned from the platforms after the Jan. 6 Capitol riot.

About 68 percent of adults have received at least one shot of the COVID vaccine in the US.Nathan Papes/The Springfield News-Leader via AP, File

“These companies have been co-opted, coerced and weaponized by government actors to become the enforcers of illegal, unconstitutional censorship,” Trump said.

Trump lawyer John Coale said the suits would prove that the tech companies “are government actors” and that “therefore, the First Amendment does apply” to their actions.