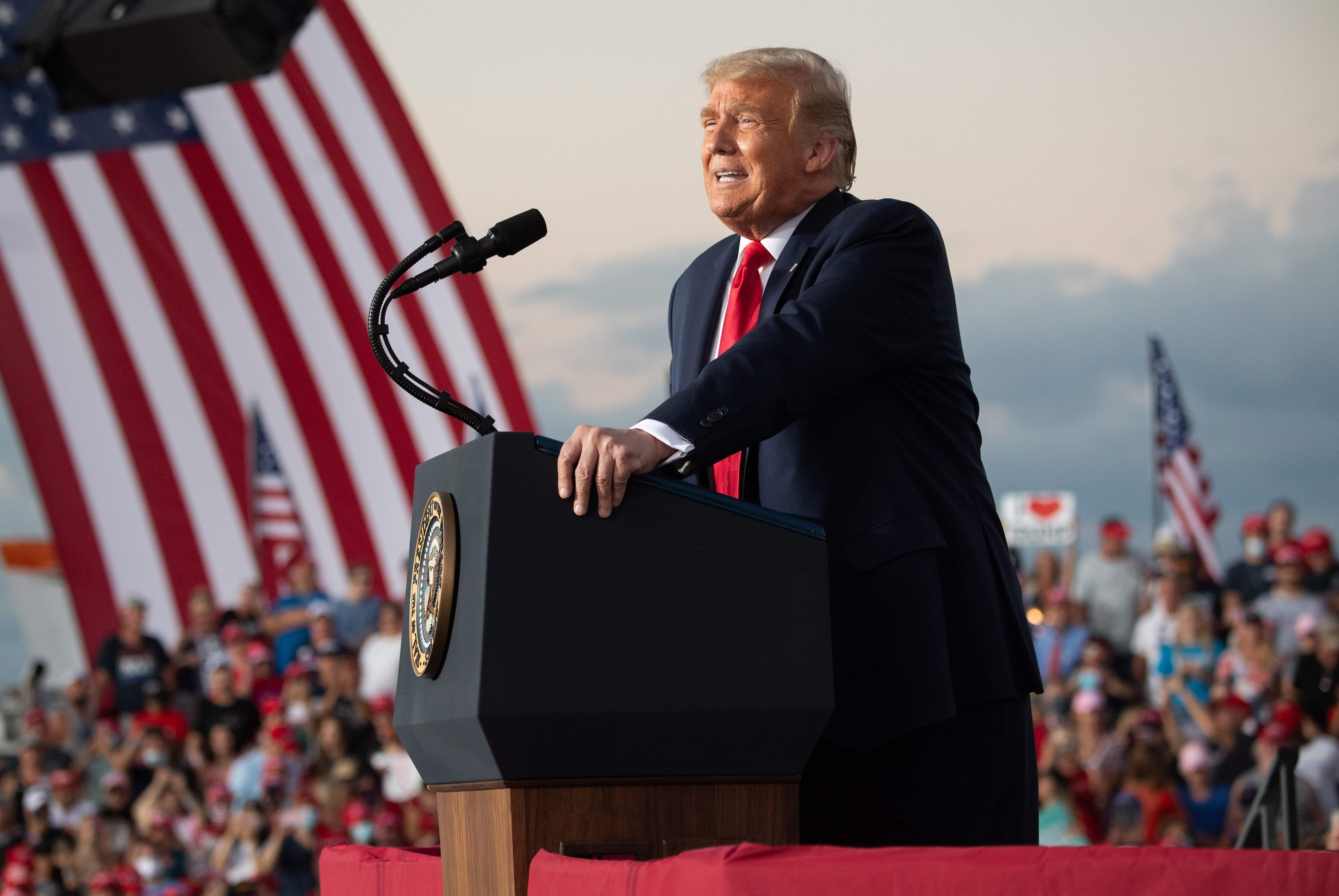 President Donald Trump returned to the campaign trail Monday night, holding his first rally in Florida after contracting the coronavirus.

WASHINGTON – Faced with a daunting new political environment, President Donald Trump returned to the campaign trail Monday as he proclaimed himself healthy and took the podium maskless at a Florida rally just a week-and-a-half after testing positive for COVID-19.

“I don’t have to be locked up in my basement and I wouldn’t allow that to happen anyway,” Trump told supporters at Orlando Sanford International Airport, his first big campaign rally since getting sick with the coronavirus.

Trump hit the stage with new political challenges as well: a string of polls show him trailing Democratic challenger Joe Biden both nationally and in key battleground states like Florida.

While claiming himself cured of COVID, Trump also asserted he is “immune” from the virus moving forward, though some medical professionals said there is no guarantee of that.

“Now they say I’m immune. I just feel so powerful,” Trump said. “I’ll kiss everyone in that audience. I’ll kiss the guys and the beautiful women and the… I’ll just give you a big, fat kiss.”

Trump also returned to familiar themes, attacking Biden and the “Washington establishment,” talking up the stock market and Supreme Court nominee Amy Coney Barrett, and savaging the media for reporting on his illness. He pledged to have new COVID-19 vaccines soon, though doctors said that are still months away.

As for more recent events, Trump said the new polls showing Biden expanding his lead are “fake,” and he continued to attack mail-in voting as potential “fraud.”

After speaking for only 18 minutes at a White House event on Saturday, Trump’s comeback rally lasted a little more than an hour, close to the normal length.

President Trump received mostly the same treatment as anyone would get for COVID-19, except for one experimental drug and the speed of his care.

The Florida trip, which will be followed this week by rallies in Pennsylvania, Iowa, and North Carolina, also took place amid continuing questions about the president’s health.

In a statement released a few hours before the Florida rally, presidential physician Sean Conley said Trump has tested negative for COVID-19 “on consecutive days” – he didn’t say which ones or how many – and “the President is not infectious to others.”

White House Press Secretary Kayleigh McEnany and several of her aides were among West Wing staff members who announced last week they had also tested positive for the virus.

“This trip is a reminder to voters that Trump doesn’t care about their health, he doesn’t care about getting the virus under control so we can fix the economy,” Schwerin said. “He only cares about feeding his ego in front of his adoring hardcore supporters.”

Jonathan Reiner, professor of medicine and surgery at George Washington University, described the Florida as “insane for multiple reasons.”

For one thing, he said, Florida has a high rate of positive COVID cases, “so it’s a certainty that there will be infected people in that crowd and this can be another superspreader event.”

Reiner also said it’s not clear that Trump is “truly negative” because his doctor did not specifically say that the more reliable “PCR test” turned out that way.

There are also lingering questions about how he contracted COVID-19 before he announced by tweet that he had tested positive shortly before 1 a.m. ET on Oct. 2.

Since then, Trump and his aides have refused to say when he last tested negative, leaving open the possibility he was already infected when he debated Biden on Sept. 29, hosted a rally in Duluth, Minn., the next night, and hosted financial donors at his New Jersey golf club the day after that.

Trump spent the weekend of Oct. 2-5 in Walter Reed National Military Medical Center, returning late that Monday in a nationally televised spectacle in which he pulled off his mask after ascending the steps of the North Portico. Trump has attributed his recovery to treatments that include an experimental antibody drug from Regeneron Pharmaceuticals and dexamethasone, a steroid.

During a week of convalescence at the White House, Trump visited the Oval Office on occasion, taped video messages he tweeted out, and gave interviews to supportive talk show hosts.

The period of seclusion ended with a rally-like event Saturday at the White House in which Trump spoke from a balcony to an invited group of supporters gathered on the South Lawn.

More: Trump claims he no longer has COVID-19 as White House dodges questions

Aides to Trump said he is well enough to handle a string of rallies scheduled throughout the week, including Johnstown, Pa., on Tuesday; Des Moines on Wednesday, and Greenville, N.C., on Thursday.

“He is strong,” said campaign manager Bill Stepien, who returned to the office this week after testing positive for the virus himself. “He is energetic. He is raring to go.”

Democrats questioned whether Trump should be out on the road so soon after getting sick.

Biden said Trump’s trip to northern Florida brought “nothing but reckless behavior, divisive rhetoric, and fear mongering,” as well as “no plan” to combat the pandemic and the economic damage it has wrought.

“His reckless personal conduct since his diagnosis has been unconscionable,” Biden told supporters in Cincinnati shortly before Trump’s rally in Sanford.

Trump also returns to active campaigning down further in the polls.

After the debate – one in which Trump took criticism for constantly interrupting Biden and declining to disavow white supremacy – the Democrat expanded his lead in a series of polls.

The Real Clear Politics average of recent national polls gives Biden a lead of slightly more than 10 percentage points. Biden also leads in key states like Florida (3.7% at the time of the rally), Pennsylvania (7.3%), Michigan (7.0%), and Wisconsin (6.3%), according to website’s average of state polls.

The race is also tight in normally Republican states like Georgia and Texas.

At his Florida appearance, Trump said he has no choice but to get out and campaign across the country.