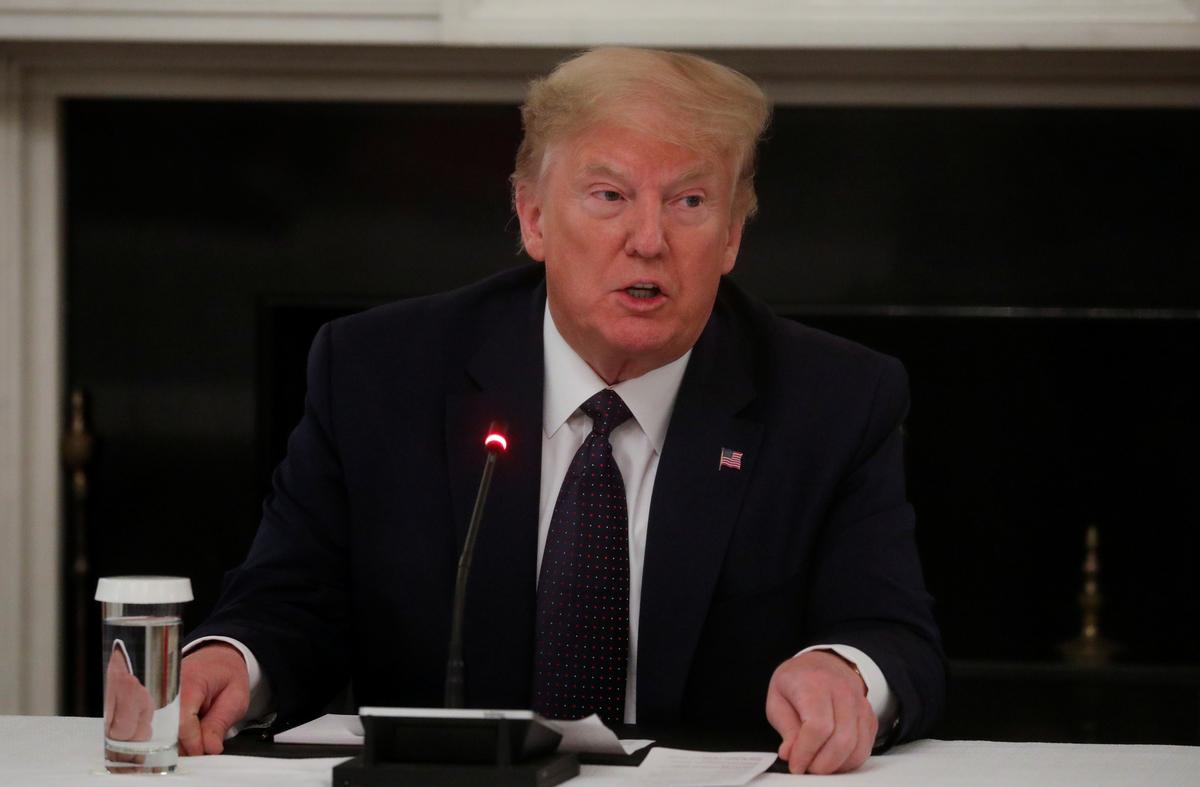 (Reuters) – U.S. President Donald Trump’s administration awarded a contract worth up to $812 million for a new U.S. company to manufacture drugs and drug ingredients to fight COVID-19 on American soil, aiming to end dependence on other countries.

U.S. President Donald Trump speaks with restaurant executives and industry leaders during a coronavirus disease (COVID-19) pandemic meeting in the State Dining Room at the White House in Washington, U.S., May 18, 2020. REUTERS/Leah Millis

The administration has been looking to build up the ability to produce drugs and their raw materials in the United States after the global pandemic exposed the industry’s dependence on China and India for its supply chain.

“For far too long, we’ve relied on foreign manufacturing and supply chains for our most important medicines and active pharmaceutical ingredients while placing America’s health, safety, and national security at grave risk,” Peter Navarro, director of the White House Office of Trade and Manufacturing Policy, said in a statement.

Navarro for months has been advocating that Trump issue an executive order to require federal agencies to buy U.S.-made medical supplies and pharmaceuticals.

The U.S Department of Health and Human Services said it had awarded a four-year, $354 million contract to privately-held Phlow Corp to make COVID-19 drugs, other essential drugs and their ingredients. The contract – which is for generic drugs, not more complicated products like vaccines – can be extended to a total of $812 million over 10 years.

Phlow, which was incorporated in January, said the contract will help it contribute to a national stockpile of pharmaceutical ingredients for essential medicines.

The company is run by Eric Edwards, who previously founded the drug company Kaleo Pharmaceuticals with his twin brother. He said in an interview that Phlow initially reached out to the U.S. health department last November, to tell them that they were working to build U.S. drug manufacturing capacity.

After COVID-19 hit, Edwards said Phlow focused on drugs for the virus and reached out to Navarro’s office and government agencies.

“We said, ‘You’re going to have a problem.’ The supply chain was already vulnerable, with all of these drug shortages before COVID-19,” he said.

The company submitted a proposal on drug manufacturing in response to an open request from the Biomedical Advanced Research and Development Authority, one of the HHS agencies overseeing COVID-19 vaccine and drug development, he said.

Phlow has already started making pharmaceutical ingredients and finished dosage forms for over a dozen medicines to treat hospitalized patients with COVID-19-related illnesses, including medicines for pain management, sedation for ventilators, blood pressure support for critical patients and antibiotics.

All pharmaceutical products will be made in the United States, according to Phlow’s website. The company said it is working to build advanced manufacturing capability in Virginia, as well as sterile manufacturing facilities for injectables.

It has partnered with generic drug manufacturer Civica Rx, chemical company Ampac Fine Chemicals and Virginia Commonwealth University’s Medicines for All Institute. It said it has already delivered over 1.6 million doses of five essential generic medicines to treat COVID-19 patients to the U.S. Strategic National Stockpile.

Edwards’ previous company Kaleo was criticized for high prices, including a $4,500 price tag on Evzio, its device to treat painkiller overdoses. Kaleo lowered the price for federal and state government agencies as well as patients without government or commercial insurance

A Phlow spokesman said Edwards never had any control over drug pricing during his tenure at Kaleo and is committed to providing low-cost generic drugs.