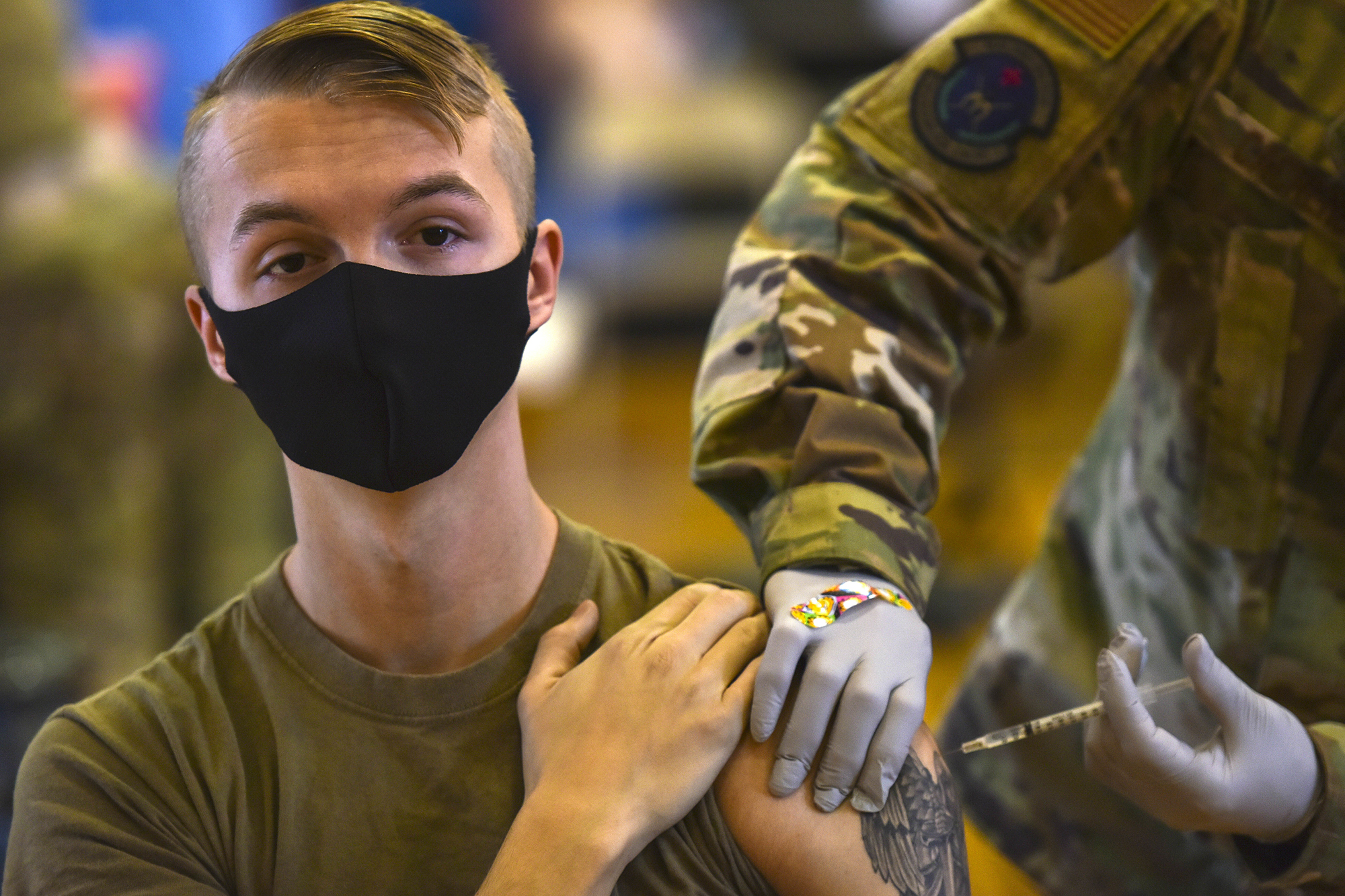 WASHINGTON — By the thousands, US service members are refusing or putting off the COVID-19 vaccine as frustrated commanders scramble to knock down internet rumors and find the right pitch that will persuade troops to get the shot.

Some Army units are seeing as few as one-third agree to the vaccine. Military leaders searching for answers believe they have identified one potential convincer: an imminent deployment. Navy sailors on ships heading out to sea last week, for example, were choosing to take the shot at rates exceeding 80 percent to 90 percent.

Air Force Maj. Gen. Jeff Taliaferro, vice director of operations for the Joint Staff, told Congress on Wednesday that “very early data” suggests that just up to two-thirds of the service members offered the vaccine have accepted.

That’s higher than the rate for the general population, which a recent survey by the Kaiser Family Foundation put at roughly 50 percent. But the significant number of forces declining the vaccine is especially worrisome because troops often live, work and fight closely together in environments where social distancing and wearing masks, at times, are difficult.

The military’s resistance also comes as troops are deploying to administer shots at vaccination centers around the country and as leaders look to American forces to set an example for the nation.

“We’re still struggling with what is the messaging and how do we influence people to opt-in for the vaccine,” said Brig. Gen. Edward Bailey, the surgeon for Army Forces Command. He said that in some units just 30 percent have agreed to take the vaccine, while others are between 50 percent and 70 percent. Forces Command oversees major Army units, encompassing about 750,000 Army, Reserve and National Guard soldiers at 15 bases.

At Fort Bragg, North Carolina, where several thousand troops are preparing for future deployments, the vaccine acceptance rate is about 60 percent, Bailey said. That’s “not as high as we would hope for front-line personnel,” he said.

Bailey has heard all the excuses.

In this Feb. 9, 2021 photo provided by the Department of Defense, Hickam 15th Medical Group host the first COVID-19 mass vaccination on Joint Base Pearl Harbor-Hickam.AP

“I think the most amusing one I heard was, ‘The Army always tells me what to do, they gave me a choice, so I said no’,” he said.

Service leaders have vigorously campaigned for the vaccine. They have held town halls, written messages to the force, distributed scientific data, posted videos and even put out photos of leaders getting vaccinated.

For weeks, the Pentagon insisted it did not know how many troops were declining the vaccine. On Wednesday they provided few details on their early data.

Officials from individual military services, however, said in interviews with The Associated Press that refusal rates vary widely, depending on a service member’s age, unit, location, deployment status and other intangibles.

The variations make it harder for leaders to identify which arguments for the vaccine are most persuasive. The Food and Drug Administration has allowed emergency use of the vaccine, so it’s voluntary. But Defense Department officials say they hope that soon may change.

“We cannot make it mandatory yet,” Vice Adm. Andrew Lewis, commander of the Navy’s 2nd Fleet, said last week. “I can tell you we’re probably going to make it mandatory as soon as we can, just like we do with the flu vaccine.”

About 40 Marines gathered recently in a California conference room for an information session from medical staff. One officer, who was not authorized to publicly discuss private conversations and spoke on condition of anonymity, said Marines are more comfortable posing questions about the vaccine in smaller groups.

The officer said one Marine, citing a widely circulated and false conspiracy theory, said: “I heard that this thing is actually a tracking device.” The medical staff, said the officer, quickly debunked that theory and pointed to the Marine’s cellphone, noting that it’s an effective tracker.

In this Feb. 9, 2021 photo provided by the Department of Defense, Hickam 15th Medical Group host the first COVID-19 mass vaccination on Joint Base Pearl Harbor-Hickam.AP

Other frequent questions revolved around possible side effects or health concerns, including for pregnant women. Army, Navy and Air Force officials say they hear much the same.

The Marine Corps is a relatively small service and troops are generally younger. Similar to the general population, younger service members are more likely to decline or ask to wait. In many cases, military commanders said, younger troops say they have had the coronavirus or known others who had it and concluded it was not bad.

“What they’re not seeing is that 20-year-olds who’ve actually gotten very sick, have been hospitalized or die, or the folks who appear to be fine but then it turns out they’ve developed pulmonary and cardiac abnormalities,” Bailey said.

One ray of hope has been deployments.

Lewis, based in Norfolk, Virginia, said last week that sailors on the USS Dwight D. Eisenhower, which is operating in the Atlantic, agreed to get the shot at a rate of about 80 percent. Sailors on the USS Iwo Jima and Marines in the 24th Marine Expeditionary Unit, who also are deploying, had rates of more than 90 percent.

Bailey said the Army is seeing opportunities to reduce the two-week quarantine period for units deploying to Europe if service members are largely vaccinated and the host nation agrees. US Army Europe may cut the quarantine time to five days if 70 percent of the unit is vaccinated and that incentive could work, he said.

The acceptance numbers drop off among those who are not deploying, military officials said.

Gen. James McConville, the Army’s chief of staff, used his own experience to encourage troops to be vaccinated. “When they asked me how it felt, I said it was a lot less painful than some of the meetings I go to in the Pentagon.”

Col. Jody Dugai, commander of the Bayne-Jones Army Community Hospital at Fort Polk, Louisiana, said that so far conversations at the squad level, with eight to 10 peers, have been successful and that getting more information helps.

At the Joint Readiness Training Center at Fort Polk, Brig. Gen. David Doyle, has a dual challenge. As base commander, he must persuade the nearly 7,500 soldiers on base to get the shot and he needs to ensure that the thousands of troops that cycle in and out for training exercises are safe.

Doyle said the acceptance rate on his base is between 30 percent and 40 percent and that most often it’s the younger troops who decline.

“They tell me they don’t have high confidence in the vaccine because they believe it was done too quickly,” he said. Top health officials have attested to the safety and effectiveness of the vaccine.

“We’re trying to figure out who the influencers are,” Bailey said. “Is it a squad leader or platoon sergeant in the Army? I think it probably is. Someone who is more of their age and interacts with them more on a regular basis versus the general officer who takes his picture and says, ‘I got the shot.’″