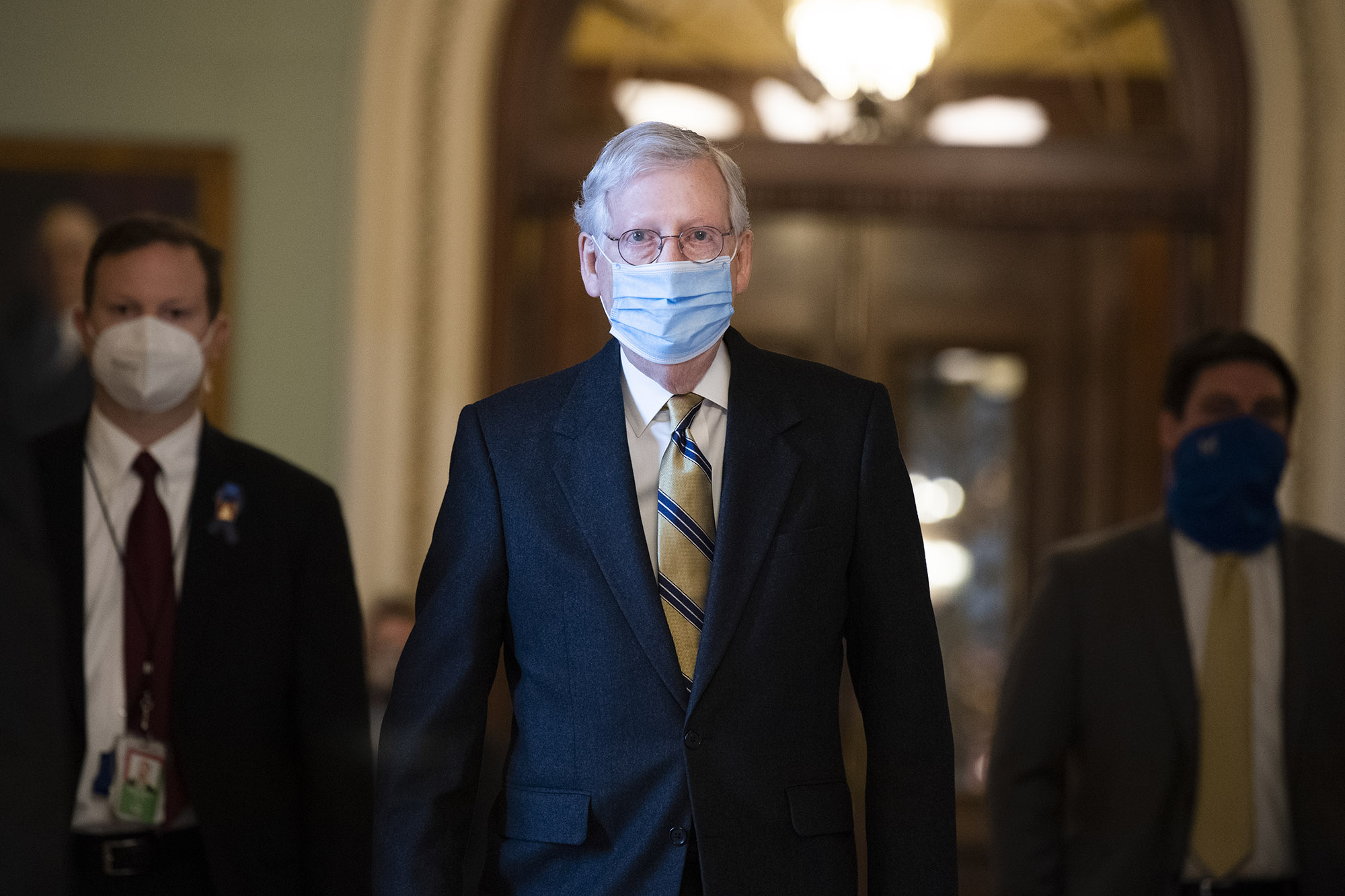 Senate Republicans led by Minority Leader Mitch McConnell are preparing to force an all-night series of votes Thursday on COVID-19 relief, including on thorny issues such as yanking funds from schools that won’t reopen and allowing the construction of the Keystone XL oil pipeline to continue.

Democrats are attempting to pass President Biden’s $1.9 trillion coronavirus relief plan without Republican support through budget “reconciliation,” giving a rare opening for legislating and free-wheeling amendments on the Senate floor.

Democrats want to approve a new round of $1,400 stimulus checks to most Americans, $350 billion in state and local aid and a national minimum wage increase to $15.

But Republicans argue that funds should be focused on ending the pandemic and returning people to work.

“This is not the time for trillions more dollars to make perpetual lockdowns and economic decline a little more palatable,” McConnell (R-Ky.) said on the Senate floor Thursday.

“Expect votes to stop Washington from actively killing jobs during a recovery by terminating the Keystone pipeline, that job-killing a one-size-fits-all minimum wage hike and whether to bar tax hikes on small businesses for the duration of this emergency,” the Republican leader said.

Led by Mitch McConnell, Republicans argue that funds should be focused on ending the pandemic and returning people to workGetty Images

“Expect votes that would help target this plan toward America’s needs: issues like [opposing] stimulus checks for illegal immigrants, [opposing] pouring money into schools where unions are blocking reopening and the common sense step of delaying new spending until existing funds have actually gone out the door.”

Biden halted the Keystone pipeline during his first week in office, citing environmental concerns but eliminating thousands of jobs. Congress in December voted to allow roughly 1.4 million US citizens or permanent residents married to illegal immigrants to collect stimulus checks. That previously was not allowed if they filed jointly.

McConnell argued that “a dark year is in the rearview mirror, brighter days are already starting to dawn, and much of the groundwork for a strong recovery is already in place. It will not serve Americans to pile another huge mountain of debt on our grandkids for policies that even liberal economists say are poorly targeted to current needs.”

A grueling debate on up to 400 Senate amendments will begin Thursday afternoon. Then, Senate committees will begin drafting the actual legislation. The Democrat-led House on Wednesday voted to have its committees also begin work. The final product may be subject to additional votes.

The use of “reconciliation” allows Senate Majority Leader Chuck Schumer (D-NY) to circumvent Republicans without technically undoing the 60-vote threshold needed for most legislation, which some Democrats want to keep.

A group of 10 Republican senators met with Biden on Monday to propose a smaller relief package, but no consensus was reached and Democratic leaders on Capitol Hill moved forward with the reconciliation process with Biden’s support. The White House argues that the bill can still be considered bipartisan due to public support from some Republican voters.

Schumer said Thursday that Senate Democrats would take a “strong step foward” and pass “a rescue plan to lift the country out of the crisis.”

“Starting this afternoon, we begin the process of debating amendments to the budget resolution. When that process is complete — at whatever hour — we’ll vote on final passage and pave the way for Senate committees to begin crafting the rescue plan itself in coordination with House committees as well,” Schumer said.

Schumer continued, “I sincerely hope our Republican colleagues approach our work today with the intention of having serious ideas considered not using not using the debate over pandemic relief to sharpen ephemeral partisan talking points.”

Congress in December passed a $2.3 trillion government funding and pandemic relief bill that authorized $600 stimulus checks for most Americans and created a $300 weekly unemployment supplement.