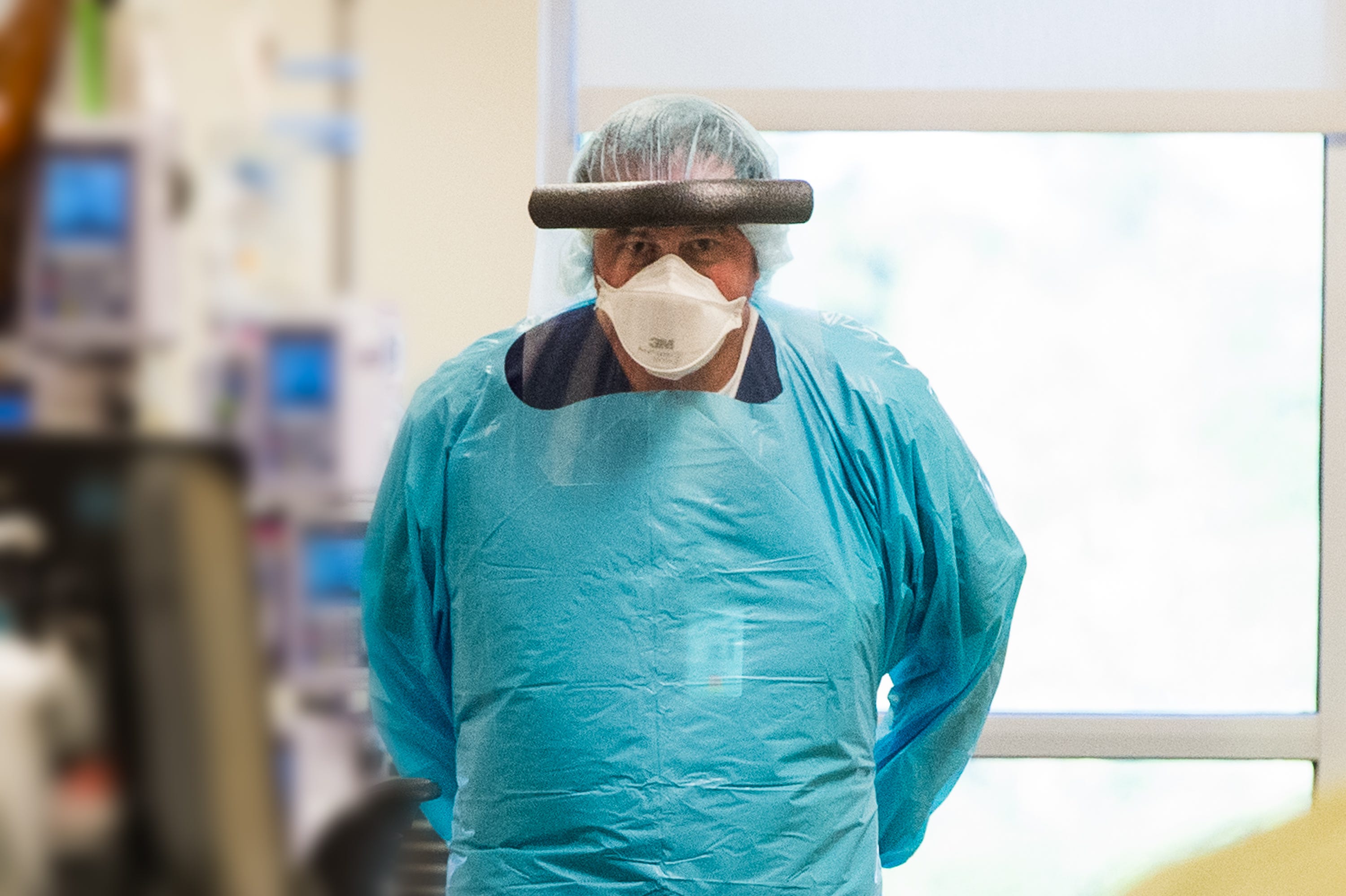 A powerful resurgence of COVID-19 infections in Louisiana is hitting the state harder than its first wave in spring, making it the only state in the nation to experience two devastating spikes of the virus, an analysis of Johns Hopkins University data shows.

The state leads in COVID-19 cases per capita, continuing to outpace even Florida, Arizona and New York, where dramatic surges of the virus have occurred since the outbreak began in March.

Louisiana leads US in total COVID-19 cases per 100k residents

But unlike those states, Louisiana has been among the worst impacted in the U.S. twice during the pandemic — once in April when the New Orleans area led the state’s rise in COVID-19 spread and again this summer when dozens of parishes across the state more than doubled the number of infections they experienced in April, according to the analysis by USA TODAY Network.

More: How the South and Southwest became the global epicenter of the COVID-19 pandemic

Louisiana’s experience with COVID-19 offers insight into how a state that took strict shut-down measures to curtail the rapid spread of the virus early on can suffer a more expansive surge after reopening. It also reveals how the course of the pandemic in a can evolve, penetrating new areas relatively untouched by the first round of infections.

Gov. John Bel Edwards, a Democrat in a mostly Republican state, took criticism in spring for his stay-home order that closed the state’s economy in the spring. But he’s been hesitant to roll back reopening, instead focusing on a mask mandate and targeted closures of bars.

Louisiana and New York have long been the top states for per capita infections, but as New York’s cases have largely plateaued in recent weeks, the virus has made a strong comeback in Louisiana.

Coronavirus hotspots shift to the South

Since the beginning of the pandemic, Louisiana has reported 116,280 total cases and 3,835 deaths from COVID-19, according to the Louisiana Department of Health’s Friday update.

Louisiana’s experience with COVID-19 offers insight into how a state that early on took strict shut-down measures to control the virus later suffered a more expansive surge after it reopened.

COVID-19 has spread far and fast in Louisiana, more ‘than any point’

Gov. John Bel Edwards, a Democrat in a mostly Republican state, took criticism early in the pandemic for his stay-home order that shut down the state’s economy in the spring. He’s been hesitant to roll back reopening since the latest surge began, instead focusing on a mask mandate and a more targeted closure order for bars.

Edwards already is signaling he likely will extend his mask and bar closure order another two weeks. And he said he hasn’t ruled out stronger measures to control the virus.

“The most important thing to know is that the situation remains very, very serious,” Edwards said during a Thursday briefing. “There’s more COVID-19 in Louisiana and across every community across Louisiana than in any point up to now.”

Edwards is right. The spread of the virus is vast in Louisiana after the state began reopening in June, and more prevalent than it was in April’s peak, according to the USA TODAY Network analysis.

New Orleans no longer the problem

That spike in July shows just how far and how fast across the state the virus has spread, with the greatest spikes reported in parishes around Shreveport, Monroe, Alexandria, Lafayette and Lake Charles, the analysis shows.

In northeast Louisiana’s Madison Parish, the summer spike brought 133 new coronavirus cases in the worst week in June, an increase of more than 4,000% over the three cases reported during the worst week of April’s peak.

In Vermilion Parish, the summer surge peak came last week with 332 cases, an increase of 1,875% over the 16 reported in the worst week of April, the analysis shows.

Sixteen of Louisiana’s 64 parishes have cumulative per capita infection rates greater than that of New York City, considered to have the nation’s worst concentration of the virus early in the pandemic. One Louisiana parish — East Carroll — has recorded more than double New York City’s infection rate, according to the analysis.

Louisiana’s two surges differ as one prompted shutdown, the other masks

Louisiana’s two defined peaks of COVID-19 place it among the worst affected areas of the country in April and then again in the summer, and the USA TODAY Network analysis shows the second peak is worse.

Louisiana first peaked in the week ending April 7, when it added 237.6 new cases per 100,000 residents, the third-worst in the country behind New Jersey and New York.

In its second surge, Louisiana sprinted past the April peak. For the week ending July 27, Louisiana added 323.2 new cases per 100,000 residents. The state’s per-capita July peak is behind only Florida and Arizona, which are experiencing their first strong spikes of the pandemic.

During the first surge, Louisiana had more aggressive measures in place to prevent the spread. Edwards issued a stay-home order on March 22 and kept the order in place until May 15, when the state moved into Phase 1 of reopening. Even with cases being confined to certain regions, the state locked down.

The second surge began after the state relaxed restrictions. Dr. Tina Stefanski, the Acadiana regional medical director for Louisiana’s Office of Public Health, said there was not enough compliance with mask and social distancing guidelines after reopening.

“As we’ve opened up businesses and society, we’re seeing an increase of cases,” Stefanski said. “Even though the virus was clearly still circulating, many people went back to their lives as they were before. It didn’t change their behavior.”

The combined effect of two waves of infections: Louisiana now leads the nation in total cases per resident since the U.S. outbreak took off in March. Louisiana reported 2,463 cases per 100,000 people, followed by Arizona with a rate of 2,347, Florida with 2,148 and New York at 2,130.

The same was true for the other parishes that had high case numbers during the first wave. The recent peaks for Jefferson and St. John the Baptist Parishes were 53% and 55% lower, respectively, than in the worst April weeks in those parishes.

But the parishes that were largely spared during the first wave are now recorded more cases than they did in April. Calcasieu Parish — which includes one of Louisiana’s most populous cities, Lake Charles — had a modest peak of new cases during the spring surge with 121 in the week ending April 7. Its peak in the summer surge, last week, was more than 900% higher, at 1,245.

Louisiana has seen signs in recent days that the state could be approaching a plateau as the number of new cases added each day has started to decline. But even with numbers of new cases falling, the state still had thousands of new cases this week, putting pressure on hospital systems.

“We hope that we’re seeing the beginnings of a trend toward a plateau in cases, although it’s at a very high level of cases,” Edwards said.

Louisiana Gov. John Bel Edwards speaks to reporters at a briefing on the state’s efforts against the coronavirus pandemic in Baton Rouge, La., Monday, May 4, 2020. (AP Photo/Gerald Herbert)Gerald Herbert, AP

Edwards said that while the state may be seeing evidence of cases leveling off, it may take a while for deaths to plateau. On Wednesday, the state recorded 69 new deaths, the highest daily count in more than two months.

“We know that deaths are a lagging indicator of what’s going on because the first thing you’re going to see is people contracting the illness, then they’re going to go into the hospital and so forth,” Edwards said. “It could be some time before this shows up in fewer deaths.”

Stefanski said she’s hopeful the mask mandate will lead to a decrease in infection levels, but it will take time to see the effects of the requirement. While more people are wearing masks, she said she’s concerned about large crowds that continue to gather.

“I’m really concerned that we’re not going to drive down the level of infection in the community to the point that we really need it to be in order to open schools safely or helping nursing homes get back to some level of visitation,” she said. “There are implications to people’s behavior socially.”

Some Louisiana hospitals prepare for the worst of second surge

Hospitals in central Louisiana, an area that has experienced some of the greatest increases in infections in the state during the summer wave, issued a plea this week for people to wear face masks and follow social distancing guidelines.

“We strongly believe the people of this community can help make this happen,” the letter said. “But to successfully do that, we need everyone to take all needed steps to limit their risk of exposure and help protect those around them. Masks, physical distancing and hand washing — these things work and can help get the virus back under control in our community.”

At the governor’s Thursday press conference, Dr. G.E. Ghali, the chancellor of the LSU Health Sciences Center Shreveport, said while North Louisiana has not seen the same large increases in case numbers as other parts of the state, it has seen a sharp uptick over the last 30 days.

On Wednesday, Our Lady of Lourdes Regional Medical Center posted a memo on Facebook written by Chief Medical Officer Dr. Henry Kaufman, which said the current rate of increasing cases “will deplete the medical resources of our community.”

In the memo, Kaufman said the community’s “resistance to common sense measures” was to blame for the area’s difficulty in combating COVID-19. Lafayette Parish and other parishes had no mask mandate until Edwards implemented the statewide mandate July 13.

“Where other places have allowed science and reason to guide their actions, the curve has been flattened and the disease has been suppressed to the point where routine personal and commercial activities have resumed,” Kaufman wrote. “Here in our community, there has been much resistance to common sense measures and we are reaping the rewards of our obstinance.”