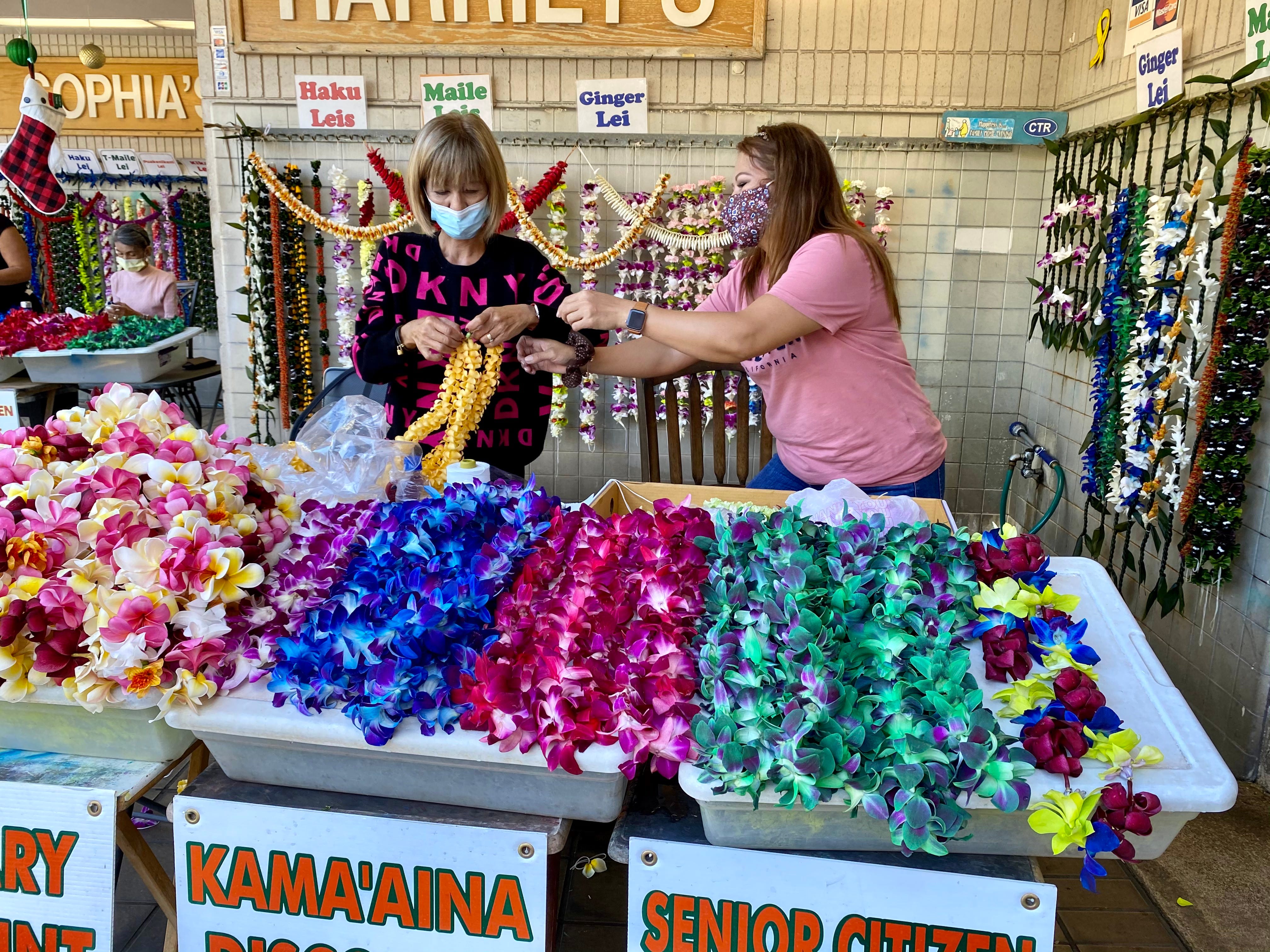 Anyone flying to Hawaii will be required to have a negative COVID-19 test result prior to their departure for the state, with the new rule going into effect two days before Thanksgiving, state officials announced Thursday. (Nov, 19)

HONOLULU — Summer Campos and her husband, Carlos, braced themselves before going through their ledger. Lei shops like theirs in Hawaii’s capital are being pummeled by the pandemic, which has essentially put tourism and major life-event celebrations, the linchpins of Hawaii’s lei industry, on hiatus.

So they were puzzled to realize they sold more flower garlands and arrangements between last July and September than they did during the same period in 2019.

The pleasant surprise was short-lived once they realized the brief period of strong sales could be attributed to the same cause as the devastating business losses they’ve suffered overall since March.

Close to 40% of Hawaii’s COVID 19-related deaths as of mid-January — 117 — occurred between July and September, according to an analysis of New York Times data. The U.S. as a whole suffered nearly 80,000 fatalities during the same time period. The number of memorials skyrocketed, as did, it seems, the number of families ordering lei.

“We became overnight grief counselors,” Summer Campos said, echoing her counterparts at other lei shops. They spent hours on the phone with people both in Hawaii and on the mainland seeking to commemorate their loved ones with traditional Hawaiian garlands and arrangements.

Lei made out of plumeria, which is one of the most popular — and fragrant — flowers in Hawaii. (Photo: Alia Wong)

The short boost in sales wasn’t enough to reverse a year of plummeting revenue for the Hawaiian Lei Company. Pandemic lockdowns have devastated virtually all of Hawaii’s lei shops and stands — even as incoming travel starts to rebound.

The stand she runs, “Martha’s,” founded by her grandmother, sits on what’s known as Lei Way, a road of shops located near the international airport. In a given day, Milan Chun often threads dozens of lei, made of flowers including plumeria, puakenikeni, tuberose and orchids.

Some days, she doesn’t sell any.

Flowers and a kiss: What is the meaning of Hawaiian lei?

To the purveyors of Hawaii’s lei shops, the pandemic is just the latest imported crisis to both challenge their way of life and remind them of the tradition’s resilience.

Lei culture descends from the Polynesians who settled in Hawaii hundreds of years ago. The practice of draping a flower garland around someone’s neck to express gratitude or reverence or love eventually became integrated into every aspect of daily life throughout the islands. It made its way into Hawaii’s tourism economy in the 1920s, when sellers would greet visitors disembarking cruise ships and adorn them with the garlands. Still, the culture has remained just as — if not more — significant to locals, for whom lei serve as a token of affection and appreciation.

“We’re the present and we are the past,” said Karen Lee, who runs Cindy’s Lei Shoppe. The store was foundedby her mother — who still makes lei — in Honolulu’s Chinatown more than 60 years ago.

Chun, who’s 80, has been picking flowers and making lei since she was a young girl. She’s always appreciated that lei-giving symbolizes the Hawaiian culture’s emphasis on sharing.

On a recent afternoon, Chun gave a customer who bought a lei and some red ginger bouquets an extra garland of blue-tinted orchids.

“Manuahi,” Chun reflected after the customer left — a word that essentially means free of charge. It is said to have originated from the name of a famous Hawaiian merchant who would often give his customers a little extra something as a gift. “Sharing is everything. That’s what Hawaii is. … It’s a way of life.”

Milan Chun selects flowers for a lei as she waits for customers at her shop near Honolulu’s Daniel K. Inouye International airport. (Photo: Alia Wong)

Lei-making has also instilled in Chun the value of being “patient in whatever we do.” And that mentality extends to how Chun and her counterparts in the industry have responded to the pandemic.

‘Wake-up call’: Will the travel industry heed the COVID-19 pandemic’s warning as it recovers?

Virtually all of the companies’ major revenue streams have dried up.

Tourists and returning residents often receive lei upon arriving at hotels or the airport, the garlands a way of saying “welcome,” “we missed you,” or, simply, aloha. In November, the most recent month for which data is available, visitor arrivals were down 77% compared with November 2019, according to the Hawaii Tourism Authority. (The state has ordered any visitors who don’t provide proof of a recent negative COVID-19 test to quarantine upon arrival.)

Meanwhile, large gatherings and celebrations — from baby luau to retirement parties — have been put on hold. So, too, have graduation ceremonies, which have accounted for some 65% of the Hawaiian Lei Company’s annual sales.

Between April and June last year, sales overall dropped by 60%, Campos said. And business this spring may not fare much better: The Hawaii Department of Education recently prohibited the state’s public schools from hosting large in-person gatherings such as proms, banquets, and celebrations for May Day (also known as Lei Day in the islands) through June 1.

Supply chain issues have further exacerbated matters, lei vendors said. After the lockdown, according to Campos, many flower growers struggled to bring their workers back. The Hawaiian Lei Company had to start ordering wholesale from other islands. The price of flower buds, Campos said, more than doubled.

Worse than a recession

The Hawaiian Lei Company had seen its sales increase every year since it launched in 2004. Lei are, as Campos put it, “recession-resistant.”

“Even when there’s a recession going on, people still celebrate” — they still graduate, get married, commemorate birthdays.

But the pandemic, Campos said, has been “100% different.”

By late spring, Campos and many of her counterparts were prepared to see their companies go under. Hawaii Gov. David Ige had extended the state’s original stay-at-home order, first issued in March, by another month. Paycheck Protection Program loans had largely run out.

Then, florists and lei shops from across Hawaii got together and lobbied Ige to allow them to open. They got approval to resume business just ahead of Mother’s Day, which along with graduation season accounts for a huge chunk of the companies’ revenue.

Vendors also got creative, responding to the crisis in nimble ways, said Lee of Cindy’s Lei Shoppe. Her business ramped up its marketing on the mainland, prompting orders from every state.

The shops reinvented their graduation season strategies too. Absent massive graduation celebrations, typically comprised of a sea of students draped with garlands literally layered up to their eyes, lei sellers didn’t have what Campos described as “the quantity demand.” So her company started marketing the idea of drive-by celebrations, where loved ones could give graduates a single, high-quality garland such as a haku — an ornate crown of flowers.

Vendors said they plan to take that same nimble approach in the months to come, and they’re confident their industry will survive. “I’m hopeful that by April there will be changes so people can actually have celebrations,” Campos said. “If not, we are prepared to go the other route.”

That confidence stems in part from customer loyalty these shops have enjoyed for generations. During an interview with a USA TODAY reporter, Lee and her Cindy’s Lei Shoppe colleagues received a gift from a long-time customer who’d stopped by to pick up lei. The gift? A small bouquet of freshly picked puakenikeni — Cindy’s favorite flower.

After all, for some Hawaiians the timeless culture of lei giving has perhaps never felt more relevant. “People changed (last) year,” Campos said. “People are embracing life and realizing what matters most and giving.”

They’re also remembering to “live in the present,” Lee said, and lei — whose flowers typically last no more than a few days — attest to why that mentality is so important.

“This is Hawaii — the lei, the people,” Chun said. “We have to really remember the Aloha Spirit.”