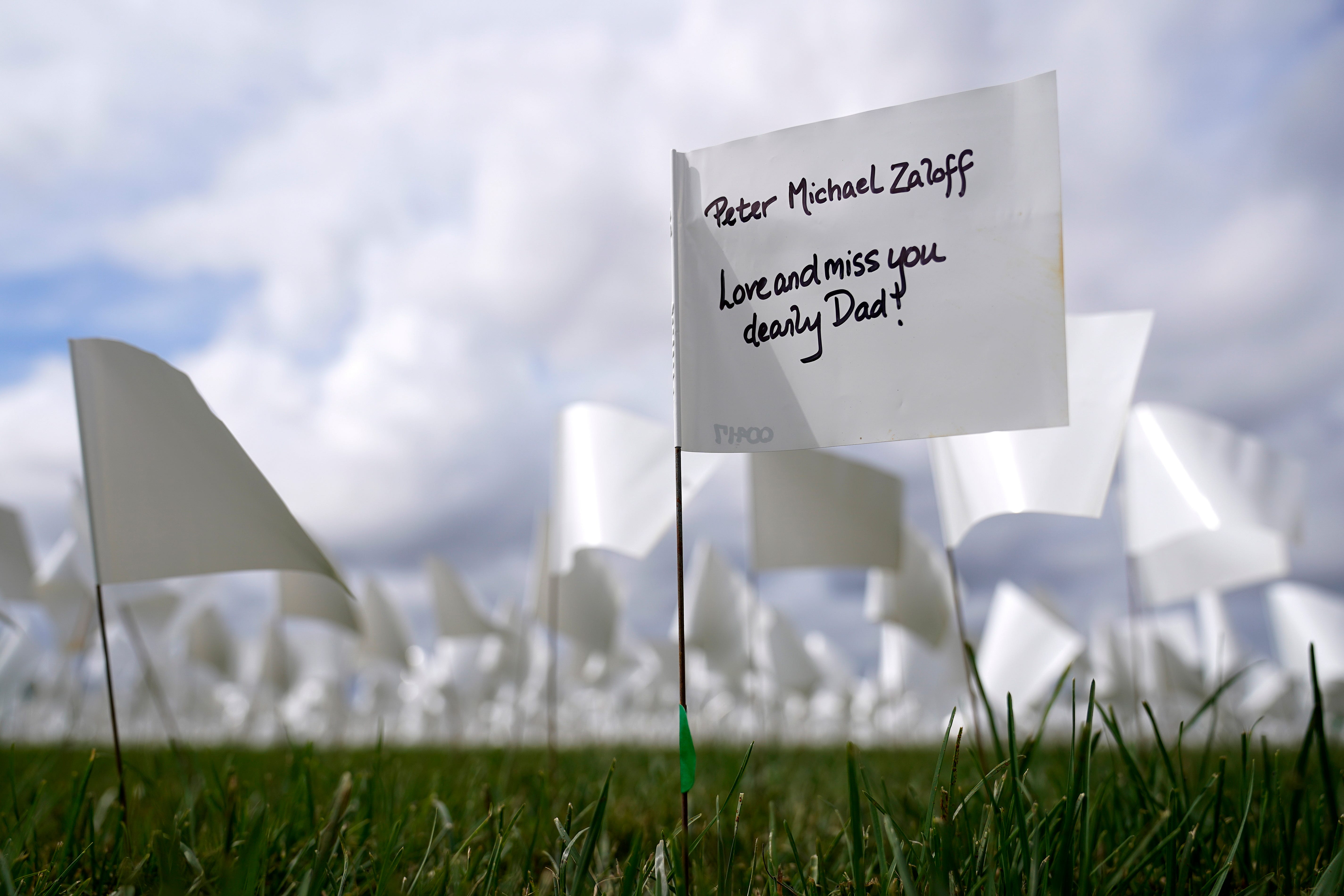 A COVID-19 vaccination requirement for teachers and other staff members took effect in New York City’s sprawling public school system on Monday in a key test of of efficacy of the vaccination mandates that are being rolled out across the country. (Oct. 4)

Johnson & Johnson said Tuesday that it submitted data to the U.S. Food and Drug Administration showing a booster shot of its COVID-19 vaccine is safe and significantly increases protection against disease.

“Our clinical program has found that a booster of our COVID-19 vaccine increases levels of protection for those who have received our single-shot vaccine to 94%. We look forward to our discussions with the FDA and other health authorities to support their decisions regarding boosters,” Mathai Mammen, a Johnson & Johnson research executive, said in a statement.

Johnson & Johnson’s vaccine is one of three authorized for use in the United States.

Unlike the two-dose mRNA vaccines made by Moderna and Pfizer-BioNTech, Johnson & Johnson’s vaccine employs only one shot before any potential booster and is an adenovirus vector vaccine.

Also in the news:

►The U.S Food and Drug Administration on Monday authorized a new coronavirus home test that the agency says will soon double the nation’s limited supply of non-prescription tests.

►Northwell Health, New York’s largest health care provider, said 1,400 employees, less than 2% of its total workforce, have been fired for refusing to be vaccinated against COVID-19. A statewide vaccination mandate for all hospital and nursing home workers took effect Sept. 27.

►A New York man was charged with a felony and could face seven years in prison for faking COVID-19 vaccine card.

►The European Union’s drug regulator gave its backing Monday to administering booster shots of the Pfizer-BioNTech COVID-19 vaccine for people 18 and older.

►Australia’s Prime Minister Scott Morrison said Tuesday that foreign visitors to the country wouldn’t be allowed back until at least next year.

►A woman who sued an Indiana hospital for not giving her mother the controversial COVID-19 treatment ivermectin has dropped her lawsuit.

📈 Today’s numbers: The U.S. has recorded more than 43.8 million confirmed COVID-19 cases and more than 703,000 deaths, according to Johns Hopkins University data. Global totals: More than 235 million cases and 4.8 million deaths. More than 185.5 million Americans – 56.2% of the population – are fully vaccinated, according to the Centers for Disease Control and Prevention.

📘 What we’re reading: COVID-19 vaccines could be available for younger children in a matter of weeks – but experts worry whether communities of color will have an equal shot at protecting their kids. Read more here.

Keep refreshing this page for the latest news. Want more? Sign up for USA TODAY’s Coronavirus Watch newsletter to receive updates directly to your inbox and join our Facebook group.

When University of Northern Iowa professor Steve O’Kane decided to require masks in his plant systematics class this fall, he was fully aware that he was breaking Board of Regents policy. Last week, O’Kane was stripped of his ability to teach the class this semester as a result.

Still, he plans to require masks again next semester. Even if it means termination.

O’Kane’s defiance of the regents’ policy prohibiting mask requirements is the largest escalation in what has been weeks of back-and-forth between faculty at UNI, Iowa State and the University of Iowa, their administrations and the state’s Board of Regents over how to best protect the community from the spread of COVID-19.

Faculty across the universities have shared concerns about the delta variant and their inability to require masks in classrooms or offices per Board of Regents guidance from May. Regents spokesperson Josh Lehman said, “The board’s guiding principle for the fall 2021 semester has been to give students a return to as much of a traditional educational experience and student life activities as possible.”

AstraZeneca on Tuesday said that it was seeking FDA emergency use authorization for its “long-acting” antibody combination to treat COVID-19.

AstraZeneca says its AZD7442 treatment, a combination of the antibodies tixagevimab and cilgavimab, is designed to have more durability than traditional antibodies. Most treatments are prescribed early in the course of disease, and while highly effective at preventing hospitalization and death, the protection is temporary. AstraZeneca says its antibody treatment could provide up to a year of protection.

In its clinical trial, AstraZeneca said the treatment reduced the risk of symptomatic COVID by 77%, and more than 75% of the study population had an increased risk of severe complications from COVID.

“With this first global regulatory filing, we are one step closer to providing an additional option to help protect against COVID-19 alongside vaccines,” Mene Pangalos, AstraZeneca’s executive vice president for biopharmaceuticals research and development, said in a statement.

Rural Americans are up to 20% more likely than their urban counterparts to die from illnesses such as cancer, heart disease and lower respiratory infections, a new federal study confirmed.

Lack of access to health care, poverty, smoking and heavy drinking all play a role in driving up the disparity between rural and urban residents – a gap likely now further being exacerbated by the COVID-19 pandemic and closure of rural hospitals.

The federal study examined the 10 leading causes of death nationally from 2009 through 2019. It also found people in cities are living longer than their rural counterparts, and that the health disparities are increasing. Rural Americans are also dying from COVID-19 infections at about twice the rate of urban Americans, based on data analyzed by the Center for Rural Health Policy Analysis at the University of Iowa.

Dr. Varinder Singh, chair of the cardiology department at New York City’s Lenox Hill Hospital, said it’s important to remember that health care disparities exist in urban areas too, especially within communities of color. But he said the federal study raises important questions about the growing urban-rural divide, and should prompt discussions about how to effectively reach rural populations with public-health messages.

The U.S. is on the verge of reporting as many COVID-19 this year as in all of 2020, according to Johns Hopkins University data.

More than 700,000 Americans have died of COVID-19, and the Washington National Cathedral was expected to toll its funeral bell 700 times Tuesday evening in memory of the lives lost.

The tolling will start at 5 p.m. ET and take over an hour, according to the cathedral.

The solemn ceremony comes as COVID-19 cases, deaths and hospitalizations in the U.S. appear to be trending downward, Johns Hopkins University data shows.

Compared to four weeks ago, hospitalization admissions for the latest week are down 26.9%, and the number of ICU beds occupied by likely COVID-19 patients is down 25.3%, according to the data.

The director of the National Institutes of Health, Dr. Francis S. Collins, says he is stepping down by the end of the year, having led the research center for 12 years and become a prominent source of public information during the coronavirus pandemic.

“There comes a time where an institution like NIH really benefits from new vision, new leadership,” Collins, 71, said in an interview with The Washington Post. “This was the right timing.”

Based in Bethesda, Maryland, and a part of the Department of Health and Human Services, NIH is the nation’s medical research agency and operates more than two dozen institutes and centers. It lays claim to being the largest supporter of biomedical research in the world.

Gov. Phil Murphy’s executive order for New Jersey is less strict than New York’s: It has allowed frequent COVID testing as an option for those who chose not to get vaccinated by Sept. 7. But most hospital systems and many nursing homes have imposed their own “vaccinate-or-out” policies. Deadlines vary, with most over the next six weeks, but the pressure is working.

Many vaccine-hesitant employees who initially opted for testing have eventually chosen vaccination. New Jersey has about 650,000 health care workers, although those who work in private offices are not covered by the state mandate.

By including nearly all sectors of health employment – from hospitals to home health care – in his executive order, Murphy was able to avoid causing migration from one type of health workplace to another one with less stringent requirements.

The Centers for Disease Control and Prevention’s list of countries where Americans should avoid travel because of “very high” COVID-19 cases grew again Monday, with Barbados and Croatia the most notable additions.

Other countries raised to level 4, the agency’s highest travel health alert level: Austria, Armenia, Latvia and New Calendonia. All had been at level 3, which indicates case counts are “high.”

More than 80 countries are now on the ever-changing list of countries travelers should avoid, including Jamaica, Aruba, Belize, the United Kingdom, Greece and other popular tourist destinations. Read more here.

But a less visible impact of the pandemic – a steep decline in educational attainment by Texas students amid the crisis – might end up having even bigger negative economic consequences long term, according to the state’s top public school official.

“This is the largest problem facing the state of Texas – the problem of making sure that our citizenry is educated to take advantage of the opportunities” generated by the economy in the future, said Texas Education Commissioner Mike Morath, speaking Monday at a Texas Association of Business policy conference in downtown Austin.

Morath, who made his comments during a panel discussion on the Texas workforce, said the percentage of third graders in the state who meet grade-level proficiency in reading and math has dropped precipitously since the start of the pandemic. Read more here.