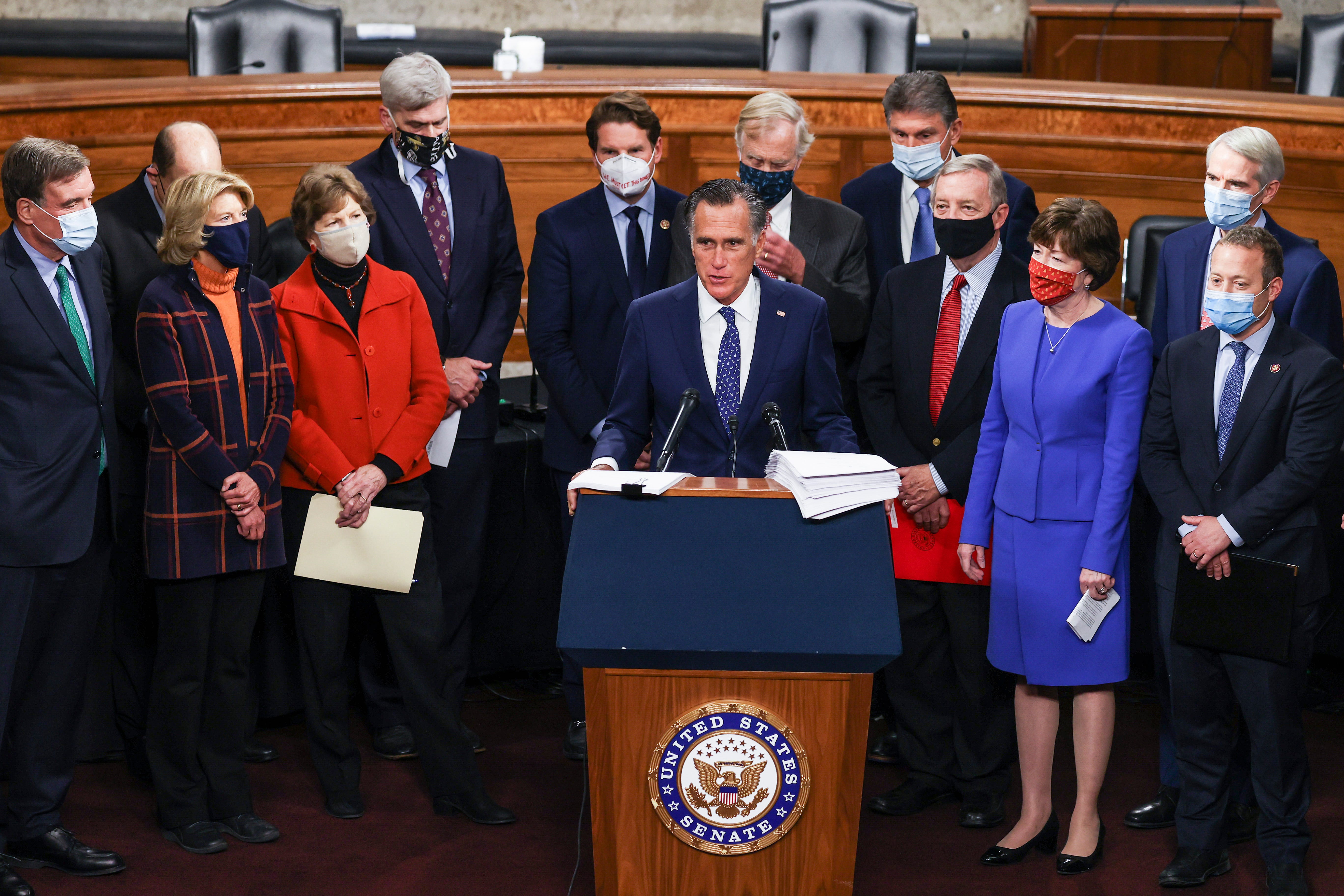 WASHINGTON – The deal aimed at helping Americans weather the fallout from COVID-19’s relentless winter was hatched at a small gathering fueled by pasta.

The $900 billion deal broke an eight-month stalemate in which talks got going in fits and starts only to give way to more gridlock.

The pressure for legislation mounted as case counts surged, death tolls climbed, and Americans felt another round of economic pain as restaurants closed, airlines laid off employees and shops scaled back.

The result was a nearly 5,600-page bill, which passed Congress just before midnight Monday and was awaiting President Donald Trump’s expected signature.

The first signs of progress emerged after the Nov. 3 election.

Manchin said he had called Collins to congratulate her on her reelection and kept talking to other senators who also felt they needed to act on stimulus, leading up to a dinner at Murkowski’s house on Nov. 17.

The lawmakers ate takeout pasta as they discussed the package, Manchin said, and at the end of the meal, Warner, one of the richest members of the Senate, picked up the tab.

Sen. Joe Manchin, D-W.Va., and a bipartisan group of lawmakers announce a proposal for a COVID-19 relief in Washington on Dec. 1. (Photo: SAUL LOEB, AFP via Getty Images)

They then kept up near-daily Zoom meetings to work out a compromise proposal, eventually bringing in the House Problem Solvers Caucus, a group of nearly 50 lawmakers from the House of Representatives.

What really got negotiations moving again, Manchin told USA TODAY, was that senators sat down with each other, rather than keeping talks at the staff level.

The Zoom chats continued even through the holidays.

“On Thanksgiving Day we were probably on Zoom for five hours,” Manchin said.

Rep. Josh Gottheimer, D-N.J., a co-chair of the Problem Solvers Caucus, a group that had come up with its own bipartisan proposal before the election, remembered participating in the calls on his car on the weekends as he shuttled between his home in New Jersey and Washington, D.C. His group of 50 House lawmakers had gotten involved with the group of senators as they came up with their legislation, a rare House and Senate collaboration, Gottheimer said.

“It’s one thing if they let me get them their coffee,” he said. “It’s a whole other thing for us to work together on legislation.”

Sen. Mitt Romney (R-UT) speaks alongside a bipartisan group of members of Congress as they announce a proposal for a Covid-19 relief bill on Capitol Hill on December 14, 2020 in Washington, DC. Lawmakers from both chambers released a $908 billion package Monday, split into two bills. (Photo: Tasos Katopodis, Getty Images)

Gottheimer said their group also kept in regular conversation with congressional leadership on both sides of the aisle and the White House as they came up with their proposal.

He recalled being so wrapped up in a lengthy Zoom call when pulled over on the Delaware Turnpike he only noticed after getting out of his car he was stopped at the “Biden Welcome Center.”

On Dec. 1, a bipartisan group of Senate and House moderates announced a $908 billion proposal that included aid for local and state governments, more help for small businesses and money to get the vaccines out.

Lawmakers vowed to push a deal through before the Christmas holiday, when they were set to leave Washington, and when several key programs were set to expire.

“It would be stupidity on steroids if Congress left for Christmas without doing an interim package as a bridge,” Warner said.

More: US health officials: No need to ban flights from UK even as it battles new coronavirus variant

A ‘game-changer’ for Democrats

Pelosi on Dec. 4 told reporters she supported the proposal as the basis for future negotiations, a shift from Democrats’ prior insistence on a bigger package.

She changed her demand and accepted a smaller bill, she said, because there had been “a total game-changer, a new president and a vaccine.” Another, larger bill would be possible once Biden was sworn into office, she said.

Republicans, however, continued to push for a different package.

On Dec. 8, Treasury Secretary Steve Mnuchin made a counter-proposal with a $916 billion package, which Pelosi and Schumer rejected because of its reduction of total unemployment funds from $180 billion to $40 billion.

But McConnell also signaled a reversal on a key Republican position that day, saying he wanted to “set aside” the Republican priority of COVID-19-related liability protections for businesses and schools if Democrats dropped their demand for state and local aid.

By then, Congress was also staring at an imminent deadline to renew funding for federal agencies to avoid a government shutdown. Lawmakers sought to attach any stimulus package to a $1.4 trillion government funding bill, so lawmakers were unable to fully fund the government until disagreements over stimulus were resolved.

On Dec. 9, with a deadline on a partial government shutdown looming on Dec. 11, the House passed legislation to keep the government open through Dec. 18. The Senate passed the bill two days later, and Trump signed it.

A week later, a stimulus deal had still not been reached, so lawmakers passed a two-day government funding bill to punt the shutdown deadline and buy lawmakers a few more days to finish negotiations.

Drama over the Federal Reserve

Leaders had high hopes for an announcement of a deal by the end of last week after most of the sticking points had been sorted out. But one of the biggest obstacles emerged Saturday when Sen. Pat Toomey – joined by his fellow Republicans – said he would not sign off on any deal unless it ended the Federal Reserve’s ability to enact emergency financial relief in the wake of the pandemic’s economic hardship.

Toomey said the facilities had served their purpose and needed to end. But there was hope for a compromise. “Give me a call,” he implored Democrats.

Hours later, Toomey huddled with other senators on the floor and met with Schumer in his office along with Romney as they worked out a compromise.

Coming out of Schumer’s office Saturday afternoon, Toomey told reporters he thought a deal was possible.

And then hours later, in the middle of the night, Toomey ultimately agreed to revised language, paving the way for an announcement Sunday that a deal on the COVID-19 relief package had been reached.

Toomey in a Sunday conference call said he was “very pleased” with how the issue was resolved, saying Republicans had achieved their goals.

Democrats had made a “fair point” about his original vision being too broad, he said, so it was rewritten.

Two senators from opposite ends of the political spectrum said they would block the legislation if it did not include stimulus checks. In an odd-couple pairing, Sen. Bernie Sanders, I-Vt., and Sen. Josh Hawley, R-Mo., had pressed for checks to be included in a final bill and warned they might block any legislation without larger checks.

But Sanders signaled Sunday evening he would not stand in the way of the deal, telling reporters he wanted a vote “as soon as possible.”

Democrats: Rep. Hakeem Jeffries draws inspiration from both the Bible and Biggie Smalls. Can he unite Democrats’ warring factions?

Sanders said he wanted a $1,200 check instead of the $600 in the compromise deal, “but a $600 check, $2400 for a family of four is going to go a very long way to helping people in the midst of this emergency. When Biden comes in, we’re going to come back and do a lot more.”

And Sen. Rand Paul, R-Ky., who had also threatened to hold up the bill over concerns about the deficit, similarly relented, blasting the bill Monday on the Senate floor for “runaway spending,” but after his speech, he told reporters, “I’ve made my point and I don’t have any reason to hold the bill up.”

Sen. John Cornyn, R-Texas, chalked up the expeditiousness to the holidays.

“I think everybody is pretty much ready for Christmas,” he said.