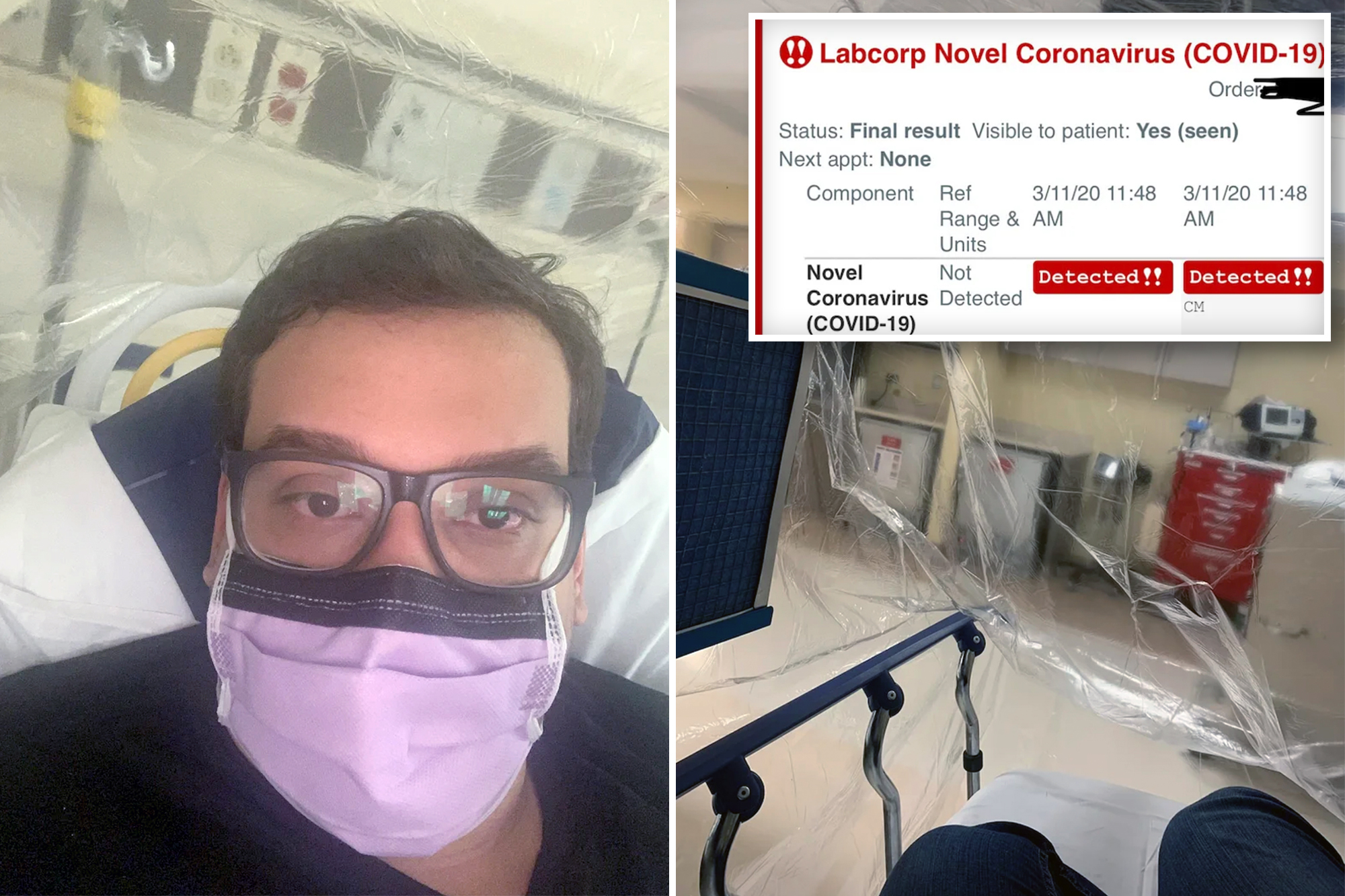 Truth-challenged Long Island Rep. George Santos on Tuesday defended his claims that he was hospitalized with a severe early case of COVID-19 during the first weeks of the pandemic by presenting photographic evidence.

The 34-year-old congressman has dramatically recounted his bout with the virus multiple times, although the timeline and severity have varied over the years, drawing skepticism given his penchant for fabrication.

Santos provided photos to Semafor of himself sick in a Queens hospital bed. He also sent a screenshot of his positive test results.

Both photos include dates that show March 11, which fits roughly into his timeline. Labcorp began testing for COVID-19 on March 5, the report said.

Semafor noted that March 11 is the date that Tom Hanks and Rita Wilson announced they had tested positive for the virus, the NBA announced it was shutting down the league and the stock market nosedived. Very few positive tests were recorded at the time.

Santos has given differing accounts of his experience of COVID-19.George Santos

On March 30, 2020, Santos told the “Empire State Conservative Podcast” that he had been taken to Elmhurst Hospital in an ambulance with COVID-19 symptoms earlier that month after possibly being exposed to the virus at the Conservative Political Action Conference on Feb. 29. The photos he provided to Semafor includes a location stamp of the hospital.

“Unfortunately, on the 9th of March I became symptomatic with what we all know now very well, COVID-19 aka coronavirus or commonly known as the Chinese flu,” he said, while laughing. “On the 11th I ended up in the hospital. It was really bad, fever, body aches, you know, all the known symptoms there.”

He told the podcast that he ran a temperature of 102.5 for five days and said he suffered from hallucinations. Santos also claimed the situation was especially dangerous because he had pre-existing medical conditions and was recovering from a brain tumor.

“I have an immunodeficiency and I have acute chronic bronchitis. I also battled a brain tumor a couple of years ago, and I had radiation done, which really lowers your immunity in general,” he said. “Radiation isn’t a game. I’m susceptible to cancer. It’s in my DNA.”

Four days after he said he tested positive and was extremely sick, the rookie congressman — who was running to represent New York’s 3rd Congressional District at the time — appeared virtually on FOX Business on March 18, looking spry and well-fed-looking discussing his recovery and how he was no longer symptomatic.

The next month, however, Santos said during a COVID-19 virtual town hall that he was still suffering from the virus through the date of his TV appearance.

Santos said he was isolated in a plastic bubble with an air filter, because the hospital had “run out of isolation rooms.”
George Santos

In September 2020, he told the Island Now outlet that he had suffered “the worst two weeks of my life as an adult” during his supposed illness.

In an interview with Fox News that October, Santos claimed he had gotten the virus on “March 7,” not March 9 as he said before.

If that were true, Santos would have been among the first 11 patients in New York City.

Santos told Semafor he became symptomatic on March 7 before he was finally admitted to the hospital and placed in isolation. He declined to address questions about a brain tumor, telling the news outlet he was not yet ready to discuss his “whole medical record.”

Santos has claimed he suffered from a brain tumor that made his infection especially dangerous.Getty Images

His claims of having a brain tumor were repeated during his unsuccessful bid for Congress in 2020 and his successful campaign last year, the Daily Beast reported.

On March 5, 2021, Santos tweeted about the one year anniversary of his hospitalization.

“A year ago today I was hospitalized unable to breath [sic]. Later in the week my test came back positive for #COVID19,” He wrote“I was bed ridden for 10 straight days from the 5th-15th. Never in my mind would I think we’d still be fighting this invisible but deadly enemy for this long…”

The congressman has denied that he was a drag performer in Brazil despite photos and videos that have surfaced in recent weeks.

The discrepancies in Santos’ tale were first uncovered by Washington Post reporter Dan Diamond on his personal blog last month.

The congressman has been caught in a bizarre web of lies since he was elected in November, lying about everything from his employment, ethnicity and his past days as a drag dancer in Brazil.

Among his more outrageous claims are that his mother died in the Sept. 11 attacks and that his grandparents escaped Nazi persecution in Europe during WWII. In reality, his grandparents and his mother were in Brazil during both of those tragedies, according to immigration records.