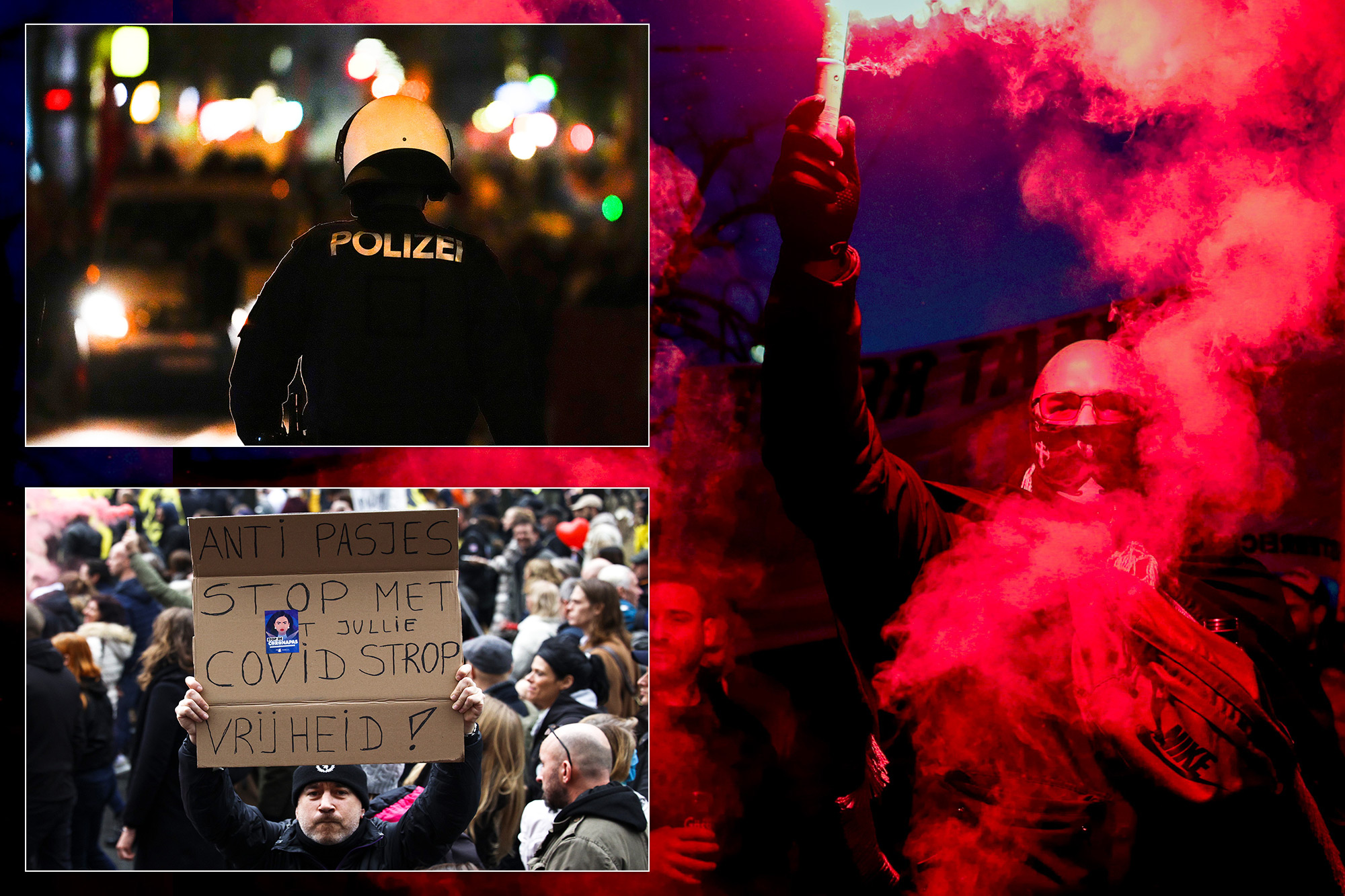 Violent protests have broken out against COVID-19 vaccine mandates and lockdowns across Europe amid new tough rules to curb winter waves of the virus.

Demonstrators angry about the new measures gathered in Austria, Croatia, Italy, Northern Ireland, the French territory of Guadeloupe and the Netherlands to protest the moves.

In the Netherlands, a second night of riots broke out Saturday over a partial lockdown, one day after police opened fire on people protesting the rules in Rotterdam.

Protesters hurled fireworks at police and set fire to bicycles in The Hague, as cops used horses, dogs and batons to chase the crowds away, the BBC reported.

Police said a rock was hurled through the window of an ambulance carrying a patient.

At least five officers were injured, with one taken away by ambulance with a knee injury, during the melees, officials said.

People burn bengalos as they take part in a demonstration against the country’s coronavirus restrictions in Vienna, Austria.AP Photo/Lisa Leutner

Despite more than 70 percent of the country being fully vaccinated, it imposed a three-week partial lockdown last weekend after recording a record spike in cases.

Bars and restaurants must close at 8 p.m., and crowds are banned at sports events.

In Northern Ireland, several hundred people opposed to vaccine passports gathered outside City Hall in Belfast, where the Christmas market opened Saturday — and proof of vaccination or a negative COVID-19 test was necessary to enter.

A man shows a poster reading: ‘Against Passes. Stop the covid noose. Freedom’ during a demonstration against the reinforced measures of the Belgium government.AP Photo/Olivier Matthys

“People like us never give up,” read one banner in the red, white and green colors of the Italian flag.

Tens of thousands of people, including far-right groups, also joined protests in Austria on Saturday after the government announced a new national lockdown and plans to make the vaccine a requirement in February 2022.

Protesters chanted, “Resistance!” and blew whistles in the massive Heldenplatz square ahead of the lockdown, which will start Monday and last 10 days but could go up to 20.

Patrols on a street alongside a demonstration against measures to battle the coronavirus pandemic in Austria on November 20, 2021. AP Photo/Florian Schroetter

Police officers argue with protestors during a demonstration against the reinforced measures in Belgium.AP Photo/Olivier Matthys

People will be able to leave their homes only for reasons such as buying groceries, going to the doctor or exercising.

On Saturday night, the demonstrators threw bottles and beer cans and fired pyrotechnics at police, who then used pepper spray to disperse the crowds.

Meanwhile, in Croatia, thousands of people gathered to carry flags and nationalist and religious symbols to protest mandatory vaccinations for public-sector workers.

In Switzerland, 2,000 people gathered to oppose an upcoming referendum on whether to approve the government’s COVID-19 restrictions law, claiming it was discriminatory, public broadcaster SRF reported.

Violent protests also broke out on the Caribbean island of Guadeloupe, one of France’s overseas territories.

Anti-riot forces clear the streets of The Hague as riots erupt amid new COVID-19 restrictions on November 20, 2021 in The Hague, NetherlandsPierre Crom/Getty Images

Protesters watch smoke flares on as street in Rotterdam, Netherlands on November 20, 2021.Sven Simcic – Video In Verzet via REUTERS

Protesters staged road blockades and set cars on fire in response to France’s COVID-19 health pass that is required to enter restaurants and cafes, cultural venues and sport arenas.

French authorities said they were sending around 200 more officers to the island and on Tuesday will impose a nightly curfew from 6 p.m. to 5 a.m.