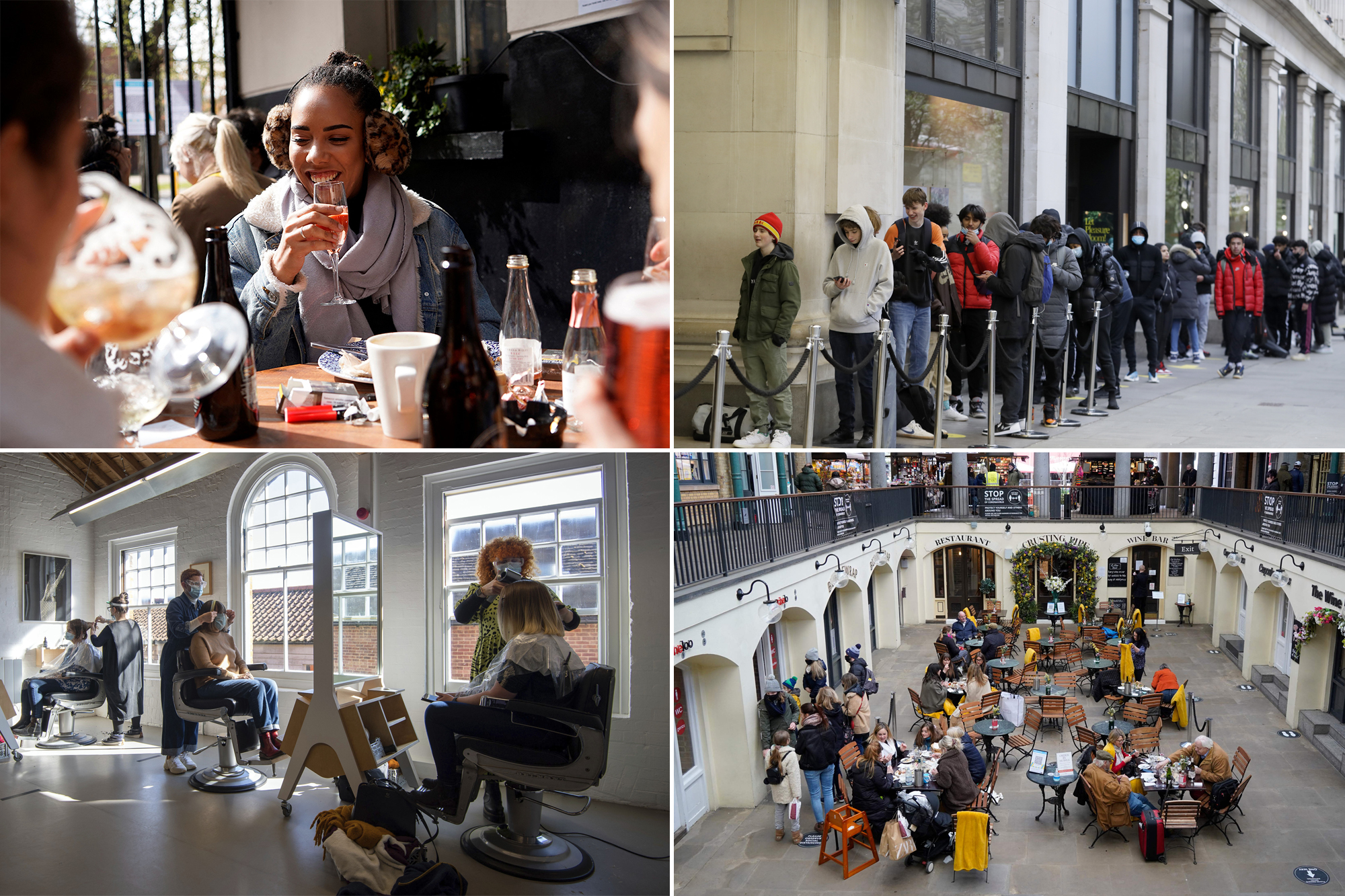 People across England were welcomed back to stores, gyms, restaurant patios and beer gardens Monday after months of strict COVID-19 lockdown.

British Prime Minister Boris Johnson called on Britons to “behave responsibly” as restrictions eased for the first time since early January, when a highly contagious variant known as B117 began spreading across the country.

Pubs started selling pints at midnight to mark the first step in the return to normal life.

“It feels good to be back,” said Matthew McGuinness, a 21-year-old student in the large garden of Wetherspoon’s Fox on the Hill pub in south London.

Later in the morning, long lines formed around retail stores that had been closed for months on London’s busy Oxford Street.

Thousands desperate to have their hair cut flocked to hairdressers and barbershops, which also reopened for the first time since the lockdown began.

Amy Smith, a customer at a hairdresser in Birmingham, said she was thrilled to be getting a trim at last.

“It’s great to be here, I’ve been going with this weird little topknot for a few months now,” she said. “I’m going to go to a beer garden experience later, so it’s going to be good.”

People watch elephants in their enclosure at Chester Zoo in Chester, northwest England, as it reopens following the easing of restrictions as England exits its third national coronavirus lockdown on April 12, 2021.OLI SCARFF/AFP via Getty Images

However, theaters, cinemas, nightclubs and most other venues remain closed, while indoor socializing is restricted and foreign vacations are forbidden.

Indoor drinking and dining won’t be allowed in England until May 17 at the earliest.

Scotland, Wales and Northern Ireland are each reopening at their own pace, but have similar plans on how to ease lockdowns.

Friends make a toast as they enjoy a drink at the Switch bar in Newcastle shortly after midnight following the easing of lockdown measures on April 12, 2021.Ian Forsyth/Getty Images

Britain faced one of Europe’s worst COVID-19 outbreaks, with at least 127,000 deaths.

But cases, hospitalizations and deaths have all plummeted due to the lockdowns and the country’s mass vaccination program that has administered shots to 60 percent of adults.

Customers sit outside a restaurant in Liverpool, Monday, April 12, 2021, as restaurants, bars and pubs can open and serve people seated outside.

The Pentagon has admitted that a US Navy destroyer captured…