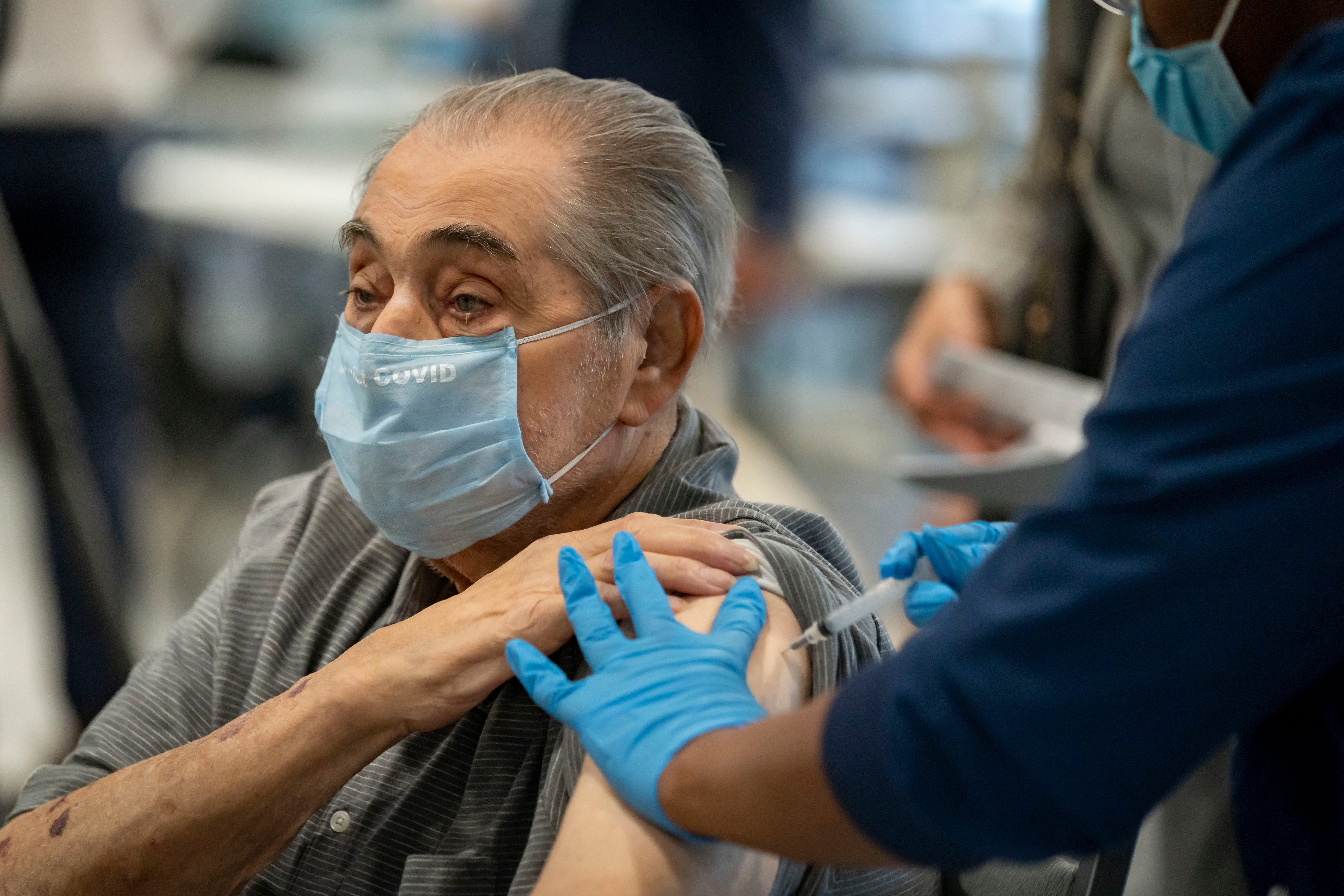 Six hospitals in Houston got long-awaited COVID-19 vaccine deliveries. Amid cheers, one of the first recipients was an intensive care nurse. (Dec. 15)

If the pace of COVID-19 vaccine delivery into people’s arms stays the way it has been for the past few weeks, it could take years rather than months to vaccinate Americans, and the outbreak will continue to dominate lives.

Federal officials overestimated the speed at which vaccines could be given, making delivery a disappointment in an otherwise successful vaccine development effort.

Doses have been distributed behind the government’s initial schedule – 15 million, instead of the 20 million doses promised to be delivered by the end of 2020. About 70% of those doses are sitting on pharmacy shelves, according to government data, and only about 14% of doses destined for nursing home residents and caregivers have been injected.

Although vaccination is off to a rough start, it’s not too late to turn the situation around, according to experts such as Kelly Moore, deputy director of the Immunization Action Coalition, an education and advocacy group.

To do so will require a host of improvements, including more money, additional staffing and greater experience with vaccines that have been shown to be safe and effective but not so easy to use.

About 200,000 doses are being given a day. Anthony Fauci, director of the National Institute of Allergy and Infectious Diseases, said vaccinators should soon be able to deliver 1 million a day.

“There were a lot of aspirational goals set by federal officials about how many vaccines could be delivered how quickly,” Moore said. “The delivery of a box of vaccine to a clinic door is the easiest part of the process.”

‘Bizarre, disorganized’: Wisconsin behind most of Midwest on COVID-19 vaccinations; some health care workers say they’re in the dark

Chicago has delivered 95% of the vaccine it’s received, but at the current rate of delivery, it would take a year to a year-and-a-half to vaccinate the city’s residents, Mayor Lori Lightfoot said Tuesday.

“That is unacceptable,” she said. “The federal government must absolutely, 100% step up.”

Chicago has built infrastructure to deliver the vaccine, Lightfoot said, but needs more doses. “The federal government has to step up, finally, and do a better job at protecting American lives from this terrible virus.”

Three weeks after shipping began, the program has distributed 15 million doses to hospitals and nursing home providers, but only 4.5 million people have gotten the first of the two-shot regimen. That means 30% of available doses have been used.

Among nursing home residents and caregivers, 365,000 shots have been delivered out of more than 2.5 million distributed – a 14% usage rate.

The numbers may be somewhat better than they appear because of a lag in reporting, but there’s no question that fewer shots are being given than was planned or expected.

Federal officials have focused on getting the vaccine onto hospital shelves, but to get them off the shelves requires “an enormous human element,” Moore said.

There are always bugs when you “translate from paper to practice,” she said, and federal plans didn’t give enough consideration to the need for scheduling and organizing clinics, educating patients and caregivers and resolving the small problems that crop up.

Hospital workers and public health officials are exhausted after 11 months of fighting the virus.

“And now they’re being asked to ramp up the most ambitious vaccine program the country has ever seen,” said Dr. Howard Koh, a former assistant secretary for health at the U.S. Department of Health and Human Services and now a professor at the Harvard T.H. Chan School of Public Health.

The protocols for this vaccine are different from those for the seasonal flu vaccine, for which a nurse can wheel a cart through hospital hallways, delivering shot after shot.

People who receive a COVID-19 vaccine have to be watched for 15 minutes to ensure they don’t have an allergic reaction. This requires hospitals to set aside space and personnel – both of which are at a premium.

The process is further slowed as caregivers have to think about who should or shouldn’t be vaccinated.

“All of those things are just part of the not-unexpected challenges we face in implementing such a complex program with a new vaccine based on a new platform in the midst of the height of the pandemic with exhausted health care workers who are at the end of their rope after all the work they’ve been doing for the past year,” Moore said.

By the time there is enough vaccine to distribute outside hospitals and other care facilities to the broader community, vaccinators will have worked out some of the kinks in the system, she said.

It may get easier to vaccinate large numbers of people when shots can be delivered at neighborhood pharmacies and health care facilities.

CVS is ready to deliver vaccine at all 10,000 of its pharmacies nationwide and expects to be able to give 20 million to 25 million doses a month once enough vaccine is available.

Wolf, who co-runs neurology services for YAI, a New York-based support organization for people with autism, Down syndrome and other conditions, came in over his vacation to vaccinate patients and the staff members who care for them.

“I was envisioning that we were going to get them in and out fast,” Wolf said, but the process was “horribly terrible.”

It took 52 clicks on each person’s digital medical record before the patient was ready to receive a shot. That was after YAI had managed to get consent forms signed by family members and guardians for those who couldn’t sign for themselves.

“It was just freaking endless,” Wolf said of the paperwork.

He and two others  were able to vaccinate 40 people in three hours, far fewer than he anticipated.

Ten caregivers refused to receive the vaccine. Some wanted to talk it over with family members. Others wanted more people to go first, while some repeated conspiracy theories about the vaccine.

Wolf said he considers himself a pretty persuasive person, and he was armed with lots of facts about the minor side effects and major benefits of the vaccine, but he said he and his colleagues couldn’t persuade those 10 to get vaccinated.

“We talk people into medication and surgery and all these other things, and we could not convince these 10 that this is what you’ve got to do to take care of yourself,” he said. “I came home so frustrated.”

Lack of money, focus and leadership

Although Congress allocated $8 billion for vaccine distribution, Koh, the former federal health official, said it’s not enough and should have arrived months ago.

“This is a field that has been under-resourced and overlooked for far too long,” Koh said.

Koh, who was commissioner of public health for the Commonwealth of Massachusetts during 9/11 and the anthrax scare in 2001, said officials promised then never to be caught off guard again by a public health emergency, but that resolve didn’t last.

He criticized the lack of federal leadership and politicization of public health, saying state and local governments should collaborate, not go it alone.

“A crisis like this should be bipartisan, nonpartisan, one government response,” he said, but that’s not what’s happened.

Moore lives in Tennessee, which has eight neighboring states each with different policies. In Bristol, Tennessee, police officers have to wait until health care workers are vaccinated, while officers across the border in Bristol, Virginia, are allowed to line up.

Different standards could mean vaccinators will hesitate to make sure they’re not making a mistake, and recipients will be more likely to pass on the vaccine, thinking they’re not a priority.

There’s no right way to prioritize who should get the vaccine first, second and third, Moore said, but having each state choose its own path is too confusing. “The right way to do this is to pick one way,” she said.

These problems are all solvable, Moore said, and it’s realistic to think they will be fixed within the next month, and the number of vaccinations will reach 1 million a day nationwide, as Fauci suggested.

Surgeon General Dr. Jerome Adams, speaking on NBC News’ 3rd Hour of TODAY agreed that the state delivery systems have been uneven, with some distributing 75% or more of available doses, and other not even 25%.

He said there would be more money coming to help out, more locations will soon be added to provide vaccinations and more people eligible to get the vaccine. “Your headline today really should be ‘Surgeon General tells states and governors to move quickly to other priority groups,’” he said.

The bottom line is that everyone wants vaccinations to move faster, said Nancy Foster, vice president for quality and patient safety policy at the American Hospital Association. Vaccines provide the chance to get beyond COVID-19 as a force in our lives.

“It is the great opportunity and the great hope,” Foster said. “No one wants to see it moving slowly.”