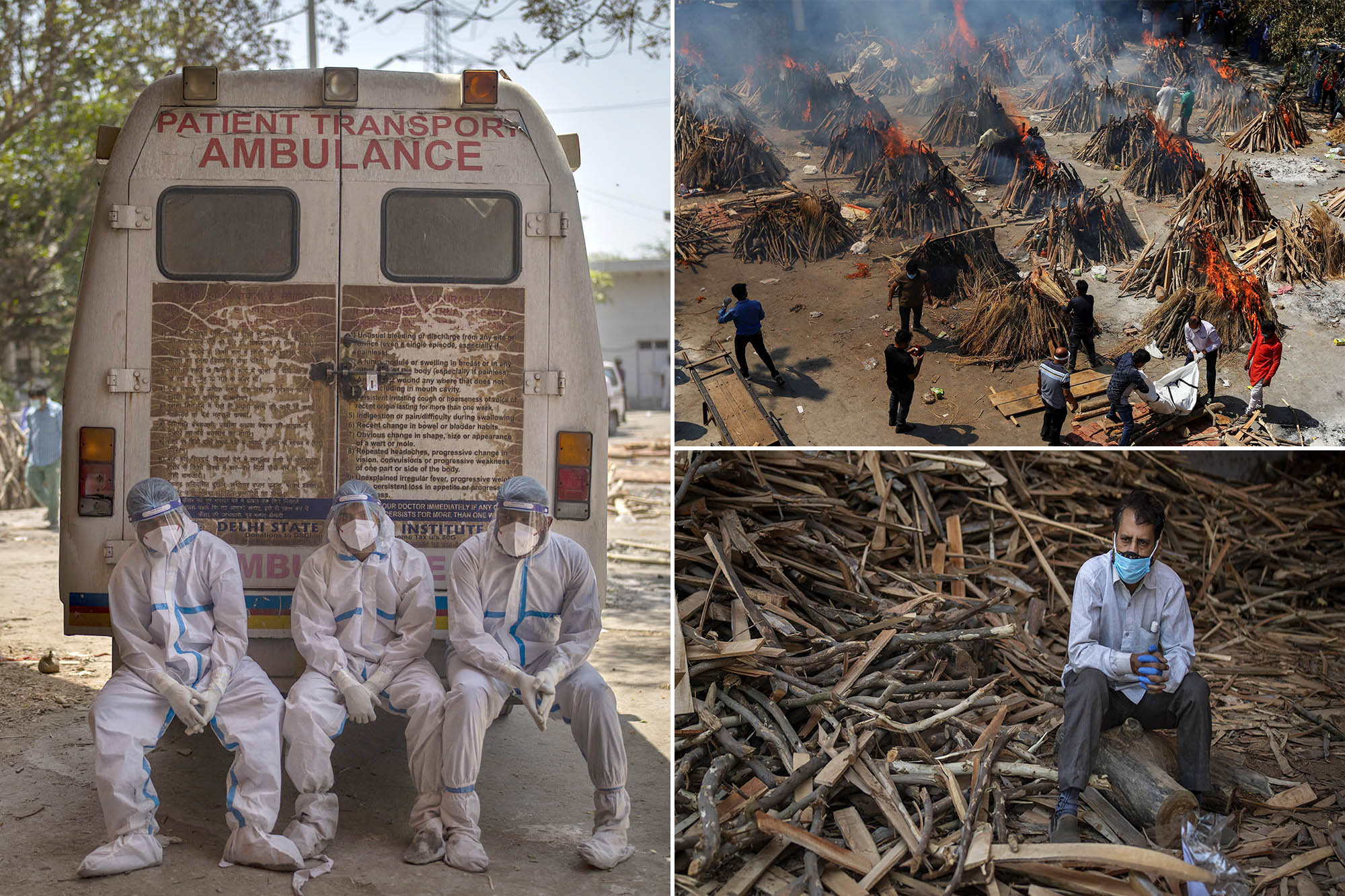 People in India are dying in the streets amid a catastrophic surge of COVID-19 infections — prompting an oxygen shortage and mass cremations to deal with the overwhelming amount of bodies.

“The virus is swallowing our city’s people like a monster,” said Mamtesh Sharma, an official at the Bhadbhada Vishram Ghat crematorium in Bhopal.

Sharma said the unprecedented crush of bodies has forced them to skip individual ceremonies and rituals that are Hindu traditions.

“We are just burning bodies as they arrive,” Sharma said. “It is as if we are in the middle of a war.”

In some of the hardest-hit cities, bodies were being burned in makeshift facilities that were running mass cremations.

Exhausted workers, who bring dead bodies for cremation, sit on the rear bumper of an ambulance inside a crematorium, in New Delhi, India.AP/Altaf Qadri

The country’s Health Ministry on Sunday reported another 2,767 fatalities in the past 24 hours, bringing the country’s mounting death count to 192,311.

Multiple funeral pyres of those who died of COVID-19 burn at a ground that has been converted into a crematorium for the mass cremation of coronavirus victims, in New Delhi, India.AP/Altaf Qadri

But the figure is believed to be much higher since suspected cases are not included and many COVID-19 deaths are being attributed to underlying conditions.

“We are just burning bodies as they arrive,” said an official at the Bhadbhada Vishram Ghat crematorium in Bhopal, India.Amarjeet Kumar Singh/SOPA Images/Shutterstock

Desperate patients are dying in line, sometimes in the road, at the country’s overfilled hospitals as they wait for treatment.

With stretchers in short supply, healthcare workers dragged a body on the ground as they headed for a cremation. The scene played out on the local news station NDTV.

Relatives and municipal workers prepare to bury the body of a person who died of COVID-19 in Gauhati, India.AP/Anupam Nath)

Hospitals in some northern states posted urgent notices saying they were unable to cope with the surge in infections as they began running out of beds and supplies.

The surge of deaths from COVID-19 has forced Indians to skip individual ceremonies and rituals that are custom to Hindu tradition.Imago via ZUMA Press

“Currently the hospital is in beg-and-borrow mode and it is an extreme crisis situation,” said a spokesman for the Sir Ganga Ram Hospital in the capital, New Delhi.

India’s Solicitor General Tushar Mehta, however, tried to play down the shortages in supplies, saying Saturday that “nobody in the country was left without oxygen.”

Family members place flowers as they perform the last rites for a COVID-19 victim at a crematorium in Jammu, India.AP/Channi Anand

The country on Monday ordered its armed forces to help tackle the crisis and said that oxygen would be released to hospitals from its reserves.

A man sits on a log while waiting for the funeral of his relative who died of COVID-19, in New Delhi, India.AP/Altaf Qadri

A funeral pyre burns for a COVID-19 victim at a crematorium in Noida, India.Imago via ZUMA Press

The country, which has a population of 1.3 billion, has an official tally of 17.31 million cases, putting it only behind the US.

A man performs the last rites of his relative as pyres of Covid-19 deceased people burn at a crematorium in New Delhi.Amarjeet Kumar Singh/SOPA Images/Shutterstock

For the fourth day in a row on Sunday, the country recorded a global record of daily cases, with 349,691 infections.