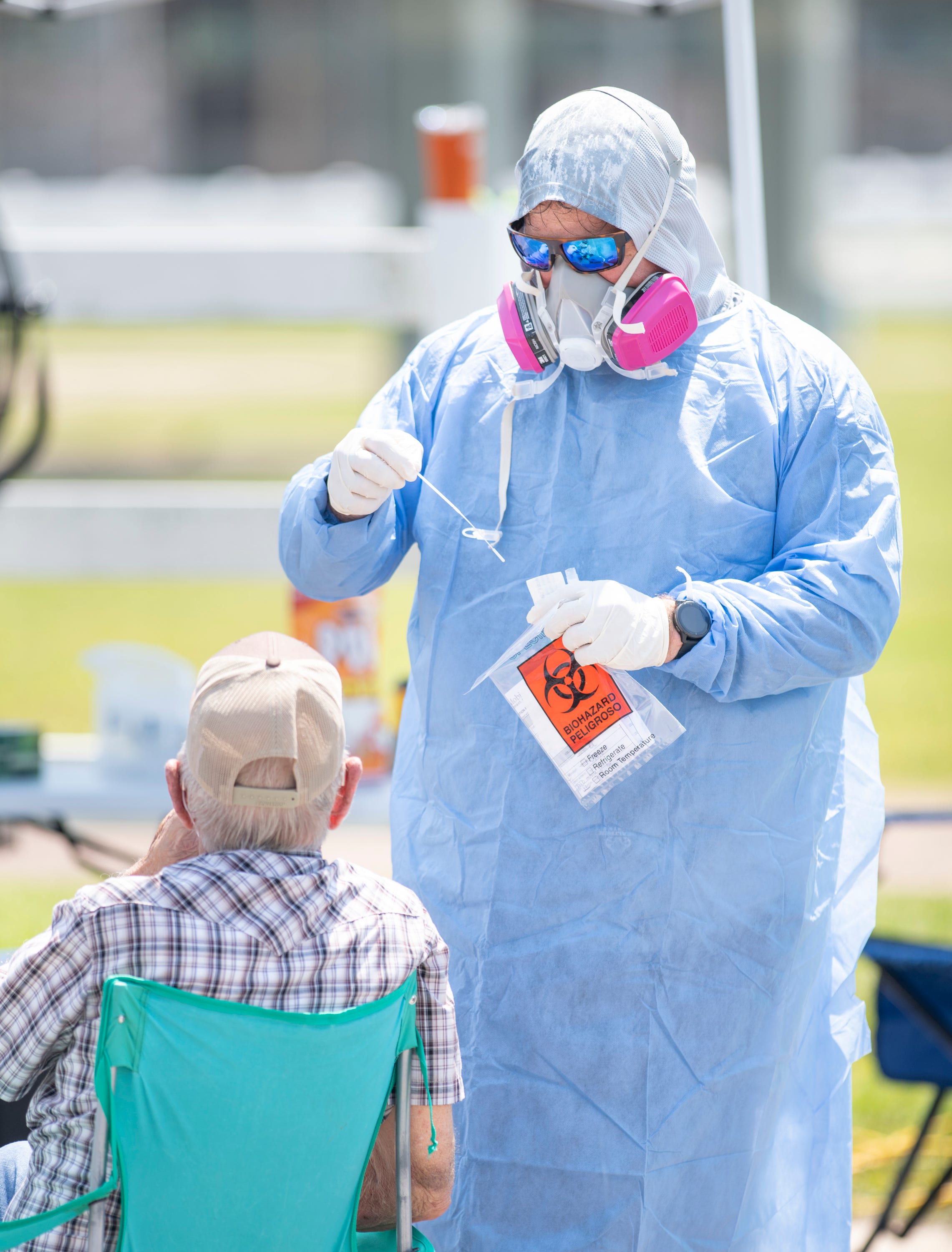 As coronavirus cases in some states start to rise again, make sure to remember these safety tips.

When will the world get a COVID-19 vaccine? Amid international skepticism, Russia on Tuesday became the first country to officially register a vaccine. President Vladimir Putin said it is ready to be used.

The World Health Organization has said all vaccine candidates should go through full stages of testing before being rolled out. In the U.S., the federal government has spent more the $9 billion to develop and manufacture candidate vaccines.

The worldwide confirmed number of coronavirus cases hit 20 million on Monday, according to the tally kept by Johns Hopkins University. But given testing limitations and the fact that as many as 40% of all those who are infected have no symptoms, health officials believe the actual number is much higher.

Here are some significant developments:

📰 What we’re reading: Fitted N95 masks are the most effective at filtering respiratory droplets from the mask’s wearer while neck fleeces offer little protection compared to others, a team of Duke University researchers found.

Russia on Tuesday became the first country to officially register a coronavirus vaccine and declare it ready for use, despite international skepticism. President Vladimir Putin said that one of his daughters has already been inoculated. Putin emphasized that the vaccine underwent the necessary tests and has proven efficient, offering a lasting immunity from the coronavirus. However, scientists at home and abroad have been sounding the alarm that the rush to start using the vaccine before Phase 3 trials – which normally last for months and involve thousands of people – could backfire.

Speaking at a government meeting Tuesday, Putin said that the vaccine has undergone proper testing and is safe.

Arizona reported just 600 new COVID-19 cases and four new known deaths on Monday, as hospitalizations for the disease continue four weeks of steady declines. Inpatient hospitalizations, ICU beds in use and ventilators in use all dropped on Sunday, continuing general downward trends over the past month, according to hospital data reported to the state.

Identified cases rose to 187,523 and known deaths totaled 4,154, according to the daily report by the Arizona Department of Health Services. Monday’s dashboard shows 80% of inpatient beds and 81% of ICU beds were in use, which includes people being treated for COVID-19 and other patients. Overall, 36% of ventilators were in use.

By the numbers: record deaths in 5 states

The Big Ten athletic directors are very close to halting football in the fall, three people with knowledge of the decision confirmed to the Detroit Free Press. The people requested anonymity because they were not authorized to speak publicly on the decision. A formal announcement is expected today.

Coming during a tense week of emergency conference meetings, the upcoming vote could signal college football’s inability to grapple with the health and safety measures needed to combat the widespread transmission of the coronavirus. Michigan and Michigan State — which both have physicians as presidents — were among the schools in favor of ending the fall seasons, according to sources. Multiple persons with knowledge of the process said the presidents voted 12-2 to end the season, though the Big Ten said Monday afternoon no official vote had taken place.

At least 16 workers on campuses in the University of North Carolina school system are suing the schools for working conditions that put them “at an increased risk of exposure to COVID-19.” Workers at UNC said that they “should not be required to be exposed to an increased risk of getting sick” due to students’ return to campus, said the lawsuit filed Monday by members of the North Carolina Public Service Workers Union, UE Local 150 and members of the North Carolina American Association of University Professors.

Bringing students back to campus places workers at higher risk of exposure to the virus, and despite masks, social distancing and hand-washing requirements implemented by the school, it is impossible to “control whether thousands of students located within their campus communities comply” with these requirements, said the plaintiffs in the lawsuit, filed at the Wake County Superior Court.

Health officials are quitting or getting fired amid outbreak

A review by the Kaiser Health News service and The Associated Press finds at least 49 state and local public health leaders have resigned, retired or been fired since April across 23 states. One of the latest departures came Sunday, when California’s public health director, Dr. Sonia Angell, was ousted following a technical glitch that caused a delay in reporting hundreds of thousands of virus test results — information used to make decisions about reopening businesses and schools.

Dr. Tom Frieden, former director of the Centers for Disease Control and Prevention, said they reflect burnout as well as attacks on public health experts and institutions from the highest levels of government, including from President Donald Trump, who has sidelined the CDC during the pandemic.

“The overall tone toward public health in the U.S. is so hostile that it has kind of emboldened people to make these attacks,” Frieden said.

Mississippi legislators have returned to the state Capitol for the first time since a coronavirus outbreak in early July hospitalized several legislators and killed one person. Mississippi’s state health officer, Dr. Thomas Dobbs, said 49 legislators had tested positive in the outbreak — more than one-fourth of the entire body.

Lawmakers left the building July 1 after working there throughout the month of June, many without wearing masks or following social distancing regulations. The health officer said at least four legislators were hospitalized and three required intensive care. Dobbs said that at least 12 others, including lobbyists and staff, were infected, including one non-legislator who died.

On Facebook: There’s still a lot unknown about the coronavirus. But what we do know, we’re sharing with you. Join our Facebook group, Coronavirus Watch, to receive daily updates in your feed and chat with others in the community about COVID-19.

In your inbox: Stay up-to-date with the latest news on the coronavirus pandemic from the USA TODAY Network. Sign up for the daily Coronavirus Watch newsletter here.

Tips for coping: Every Saturday and Tuesday we’ll be in your inbox, offering you a virtual hug and a little bit of solace in these difficult times. Sign up for Staying Apart, Together here.