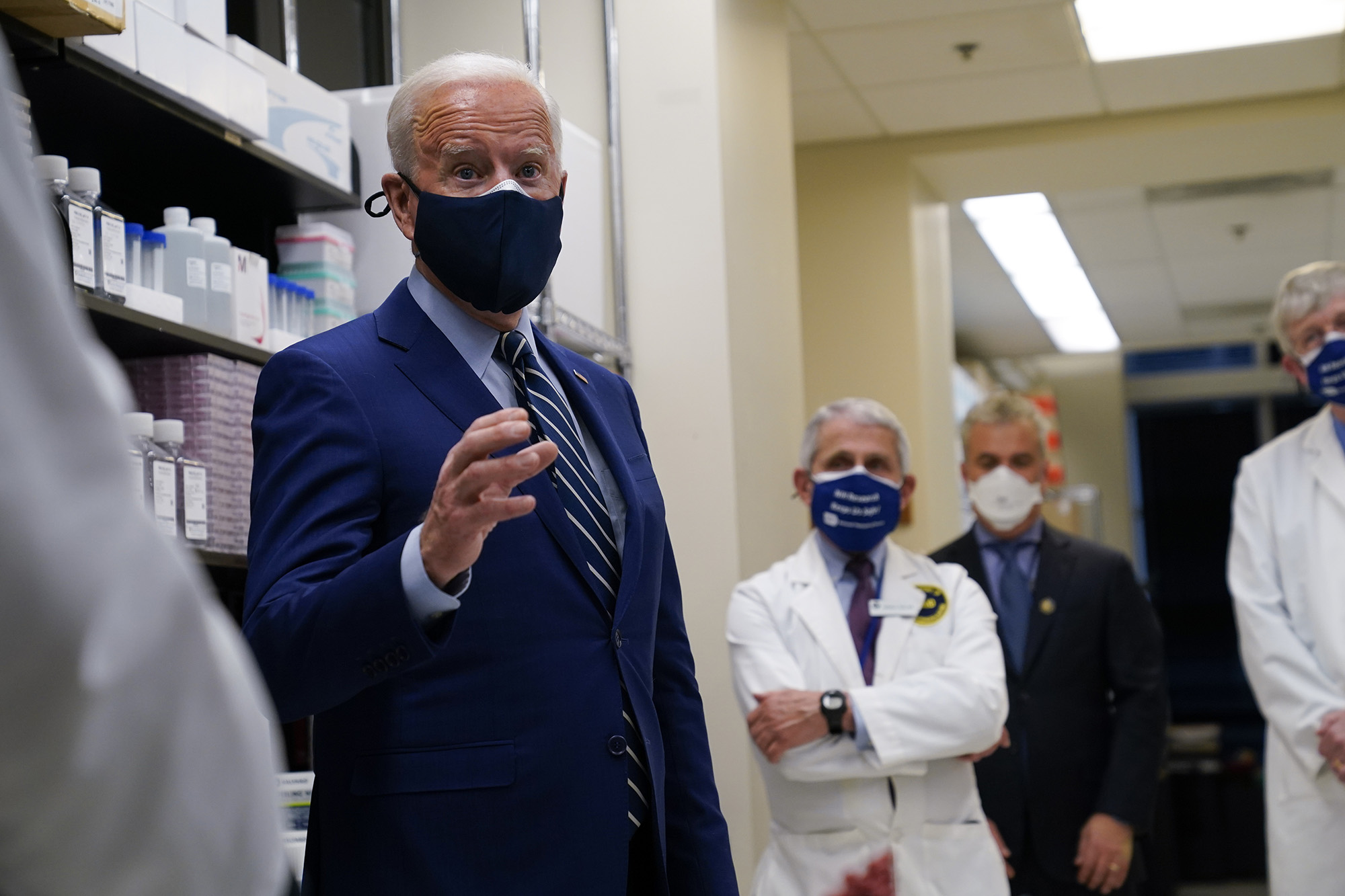 President Biden on Thursday stressed the importance of wearing masks until at least 2022 to save lives — despite declaring the US will have enough supply of vaccines by the summer to inoculate 300 million Americans.

The president told reporters during a visit to the National Institutes of Health complex that he would not take his mask off even though he was standing more than 10 feet away from Dr. Anthony Fauci and NIH Director Dr. Francis Collins.

“You know that wearing this mask through the next year here can save lives — a significant number of lives,” Biden said. “And so I apologize if you don’t hear me as clearly as you, maybe you should.”

Biden warned that the country is still “in the teeth of this pandemic” with new highly-contagious variants spreading.

“The new strains emerging create immense challenges, and masking is still the easiest thing to do to save lives. But we need everyone to mask up.

President Biden chose to keep his mask on even as he was more than 10 feet away from Dr. Anthony Fauci.Evan Vucci/AP

However, with more than 26 million jabs delivered in Biden’s first three weeks in office, the US is on pace to exceed his goal of administering 100 million doses in his first 100 days.

“Just this afternoon, we signed the final contracts for 100 million more Moderna and 100 million more Pfizer vaccines.  And we’re also able to move up the delivery dates with an additional 200 million vaccines to the end of July — faster than we expected,” the president said Thursday.

President Biden listens as Kizzmekia Corbett, an immunologist with the Vaccine Research Center at the National Institutes of Health speaks, during a visit to the Viral Pathogenesis Laboratory at the NIH.Evan Vucci/AP

“That means we’re now on track to have enough supply for 300 million Americans by the end of July.”

Biden also said that the government has so far provided $3 billion to 37 states, territories and tribes to bolster existing vaccination centers and open more centers to administer the shots.

“Another point of progress is we’re deploying more vaccinators. We’re now allowing retired doctors and nurses to come back and administer shots,” the president said

President Biden warned that the country is still “in the teeth of this pandemic.”Evan Vucci/AP

“We’re deploying federal vaccinators, and over the last three weeks, we put hundreds of new vaccinators in the field and are lining up thousands more.”

The “end goal” is “beating COVID-19,” the president said.