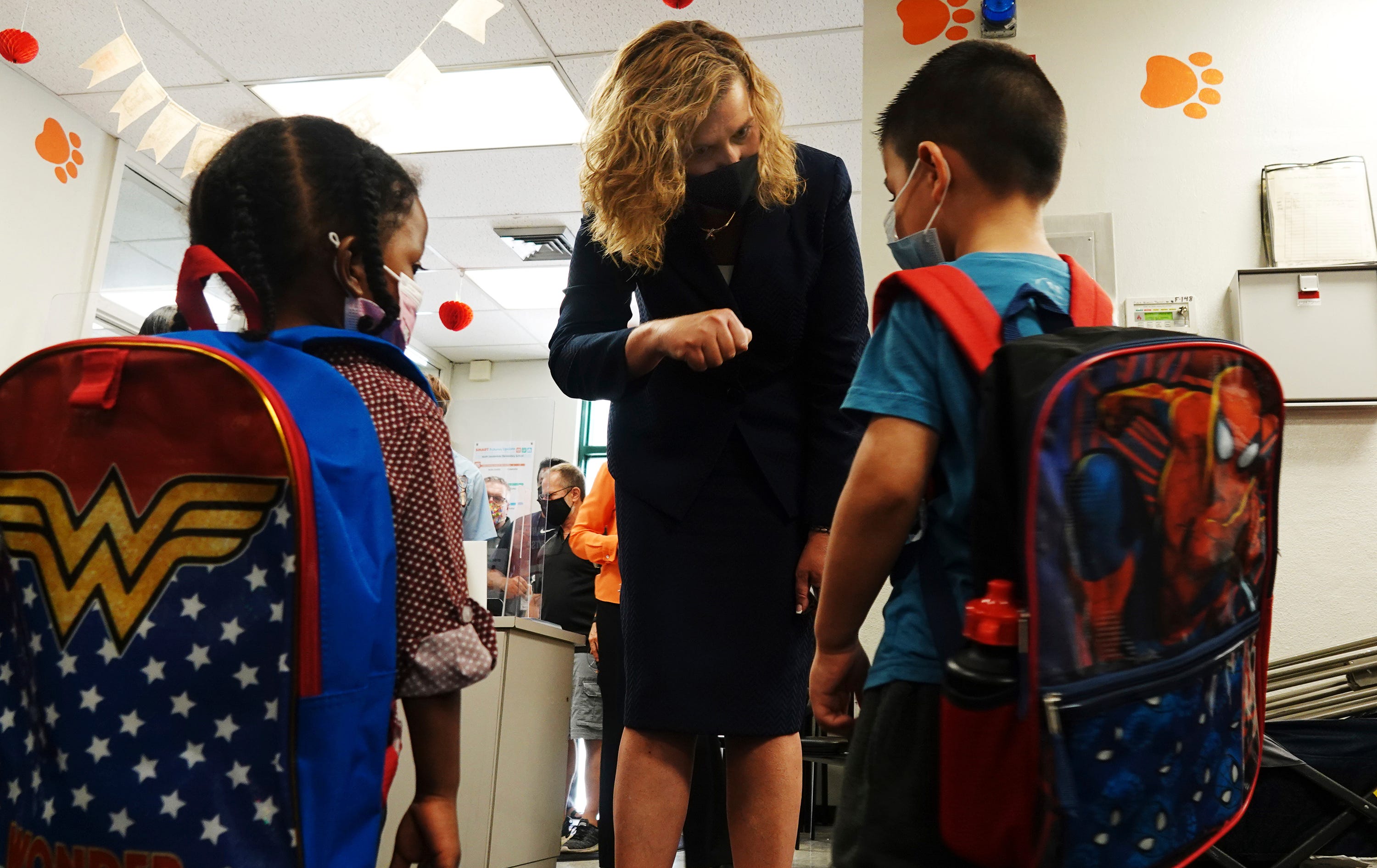 Are vaccine mandates legal? Here’s what employers are allowed to do

Google, Biden and NY State have issued vaccine mandates for employees and federal workers. Here’s how employees and unions are responding.

As the highly contagious delta variant accelerates cases, hospitalizations and deaths, the demand for COVID-19 tests is also accelerating.

When COVID-19 cases and hospitalizations plummeted in late spring, many large, government-run testing sites switched to vaccinations or shut down.

Now Americans are getting checked for COVID-19 at a pace of more than 1 million tests each day, according to Johns Hopkins University. But some experts say it’s harder to find testing appointments than last winter, when large, drive-thru sites fueled more than 2 million daily tests. At-home testing kits are also flying off of shelves as antigen test makers hustle to meet rising demands after scaling back manufacturing in spring.

As COVID-19 positivity rates surge, some worry the high percentage of positive tests in the U.S. means too many people are foregoing testing because it’s too hard to get an appointment.

“Positivity has climbed to highs that we haven’t seen since the big winter surge,” said Jennifer Nuzzo, an epidemiologist and senior scholar at the Johns Hopkins Center for Health Security. “Positivity for me, above all, is a measure of whether we are doing enough testing. As it starts to creep up, that suggests we need to cast a wider and wider net to find infections.”

Meanwhile, as students head back to school this fall, the delta variant now makes up about 90% of new infections among kids. Thousands of children and staff are under quarantine in school districts after being exposed to COVID-19, just as school is starting around the nation.

School mask, vaccine mandates: Which states have them? Do they work?

Also in the news:

►Apple will delay the return of its employees to its offices until at least January 2022, the Washington Post reported.

►Gov. Kate Brown said Oregon is expanding its COVID-19 vaccine requirement to include all teachers, educators, support staff and volunteers in K-12 schools. For a state-by-state look at school vaccine and mask mandates, click here.

►Three U.S. senators who are fully vaccinated have tested positive for the coronavirus, joining Lindsey Graham of South Carolina as members of the Senate with breakthrough infections.

►The Archdiocese of Philadelphia rejected religious exemptions for vaccination, becoming the latest district of the Catholic Church to do so. It joins at least five other dioceses that have given priests similar guidance.

►The Biden administration will not reinstate enhanced weekly $300 unemployment benefits, which are set to expire on Sept. 6. It’s instead urging states that want to continue the extra payments to use their share of COVID-19 rescue funds.

►Much of Japan kicked in its government “state of emergency” to curb COVID-19 infections Friday, as well as a less stringent “quasi-emergency,” although worries remained about their effectiveness.

📈 Today’s numbers: The U.S. has had more than 37.2 million confirmed COVID-19 cases and 625,100 deaths, according to Johns Hopkins University data. The global totals: More than 209.9 million cases and 4.4 million deaths. More than 169.5 million Americans — 51.1% of the population — have been fully vaccinated, according to the CDC.

Keep refreshing this page for the latest news. Want more? Sign up for USA TODAY’s Coronavirus Watch newsletter to receive updates directly to your inbox and join our Facebook group.

AstraZeneca will seek regulatory approval for an antibody drug after a study showed it significantly reduces the risk of developing COVID-19 symptoms, according to a Friday statement from the company.

The drug, called AZD7442, reduced the risk of developing symptomatic COVID-19 by 77%, according to the study, which has not yet been submitted to a peer-reviewed journal. No patient who received the treatment developed severe symptoms or died.

The medicine is the first antibody treatment shown to prevent COVID-19 in a clinical trial, AstraZeneca said.

As drug companies look to antibody drugs as a potential additional way to reduce hospitalizations and deaths, AstraZeneca officials say the medicine could offer an alternative to vaccines for people who refuse the shots or for whom the shots are less effective.

“We are very encouraged by these efficacy and safety data in high-risk people, showing our long-acting antibody combination has the potential to protect from symptomatic and severe disease, alongside vaccines,” Mene Pangalos, AstraZeneca executive vice president, said in the statement.

“With these exciting results, AZD7442 could be an important tool in our arsenal to help people who may need more than a vaccine to return to their normal lives,” Myron J. Levin, a University of Colorado School of Medicine professor and principal investigator on the trial, added.

The Department of Homeland Security announced that border restrictions on nonessential travel have been extended yet again, this time through Sept. 21, as the U.S. works to curb its COVID-19 case count. The restrictions had previously been extended through Saturday.

“In coordination with public health and medical experts, DHS continues working closely with its partners across the United States and internationally to determine how to safely and sustainably resume normal travel,” DHS tweeted Friday.

The restrictions have been extended every month since they were first implemented in March 2020, when DHS and its Canadian and Mexican counterparts closed the borders to leisure travelers to limit the spread of the coronavirus.

Wicker’s office said in a statement that the congressman tested positive Thursday morning after experiencing “mild symptoms.” He is isolating and in “good health,” according to the office. King’s office said he began feeling “under the weather” Wednesday, after which he took a COVID-19 test as a precaution. Hickenlooper tweeted Thursday that he tested positive, and while he “feels good,” he is isolating.

Both King and Hickenlooper urged Americans to get vaccinated in their statements.

The Texas Supreme Court on Thursday denied an attempt to block three restraining orders against Gov. Greg Abbott’s ban on mask mandates — including one that allowed all Texas school districts to require masks indoors.

The court remanded Attorney General Ken Paxton’s appeal to the 3rd Texas Court of Appeal in Austin for a hearing. Abbott reaffirmed his ban on mask mandates by any government entity, although federal agencies have mandated masks in their facilities.

The governor has said he would sue any entity that does not comply with the emergency order. The threats haven’t stopped at least 11 districts in the state from issuing mask mandates.

Louie Lopez showed up at the downtown Jacksonville Main Library Conference Center in the early afternoon for a Regeneron therapy appointment. His primary care doctor recommended it after Lopez tested positive for COVID-19 and was experiencing moderate to severe symptoms.

While waiting in line for his turn, two other people got in the line behind Lopez. Both of them, he says, sat down on the floor immediately. They eventually laid down “sick and moaning.” Lopez, 59, told The Florida Times-Union, part of the USA TODAY Network, that the woman pictured in yellow was dragging herself on the floor as the line slowly moved forward.

Lopez took a photo and sent it to his wife.

The therapy treatment is for people in the early stages of COVID-19 and the makeshift clinic where Lopez took the photo is not meant to serve as a full-fledged hospital. But amid rising COVID infections and increased worry, some people in more advanced stages of COVID have opted to go to makeshift clinics instead of hospitals due to potentially long waits. Read the full story.

Despite the huge spike in coronavirus cases across the nation, some analysts believed the number of deaths – a lagging indicator – would not soar nearly as swiftly because of the protection from severe disease provided by vaccines.

The increase has indeed been less dramatic, but no less worrisome – and it’s picking up.

Deaths are rising in 42 states, the worst tally seen since December with the U.S. Thursday reporting 625,000 deaths. In the week ending Wednesday, the U.S. reported 5,742 deaths, nearly double the total from two weeks earlier. The 10,991 Americans who died of COVID-19 in the first 18 days of August are already more than all the fatalities in June or July.

The nearly 2.2 million U.S. cases in those first 18 days make this the fifth-worst month in the pandemic, blowing past the highest monthly totals of the 2020 spring and summer surges, with case counts rising in 44 states.

And while infections have climbed by 47% in the last two weeks, deaths have more than doubled that figure at 97%, according to the New York Times database. At the current pace, 34 Americans die of COVID-19 every hour.

New daily caseloads have surpassed 150,000 nationwide, still about half the total from the pandemic’s most horrific point in January, and the current weekly average of about 800 deaths a day remains one-quarter of the fatalities at that time.